In-flight refuelling has for decades been used to extend the range of military aircraft, be they fighters, transports or even helicopters. While still complex, passing jet fuel from a tanker to a receiver aircraft is now a well-understood process.

But what happens when your aircraft rely on electricity to power their engines rather than jet fuel? Bell thinks it might have the answer and has filed a patent application for a ‘tanker’ aircraft to plug that gap. 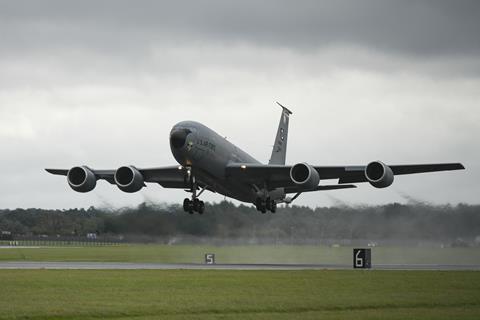 In its filing, dating from early 2020 but published by the US Patent and Trademark Office on 5 August, Bell details its system for in-flight recharging, which includes a tanker aircraft, connection system and underlying control logic.

“Whether rotary- or fixed-wing, and whether manned or unmanned, there are cases where the operational needs of an electric aircraft exceed the range of the aircraft on a single charge,” Bell’s application points out.

While landing to recharge is possible, it can be “costly” and may be “otherwise inconvenient or impractical”, says the filing.

“It is, therefore, advantageous to provide a mechanism for aerial recharging of an electric aircraft midflight.”

Bell outlines a scenario where “tanker drones” connect with “worker drones” to provide recharging. These could be similar aircraft, with, for example, a typical surveillance payload replaced by a “large battery pack” and potentially the “facilities for charging a plurality of worker drones at one time”, through multiple booms or cables.

Connection between the two aircraft would be achieved through “a rigid boom or a flexible cable”, which is equipped with “a polarized charging jack that is configured to engage a charging port”, which would be secured in place with magnets, says the patent filing.

But Bell points out that the tanker aircraft need not be uncrewed, or even powered by electricity itself: “A jet-fueled aircraft that generates electricity via its engines could similarly provide refueling services to an electric aircraft,” it says.

“For example, a military [Boeing] KC-135 aircraft is a purpose-built tanker aircraft for in-air refueling of jet-fueled aircraft. A KC-135 could also be provided with electrical recharging umbilicals that could be used to recharge electric aircraft, such as military drones or manned military electric aircraft.”

While in-flight refuelling is currently the preserve of military operators, Bell sees potential to offer aerial recharging to commercial customers on a pay-for-power basis.

The application notes that a system to control the charging and the disengagement of the receiver aircraft will need to be developed, along with a suitable combination of jack and socket. Communications between the two aircraft are a further consideration, it adds.