Boeing has formally rolled out its new F-15QA ‘Ababil’ fighter for the Qatari air force, with ferry flights to commence later this year.

The roll-out took place at the company’s St Louis factory in Missouri, where the F-15 is produced, says Boeing. The company provided a picture of three F-15QAs airborne with a two-tone air superiority grey camouflage scheme. 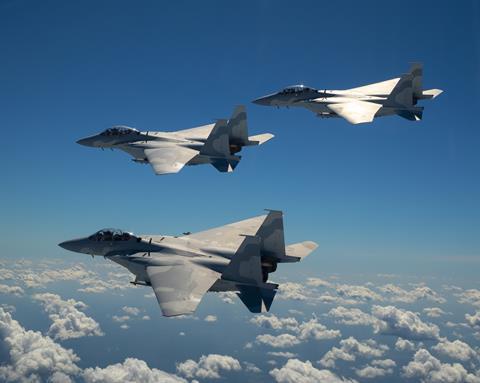 US Air Force Lieutenant General Greg Guillot, commander of the 9th Air Force, says the F-15QA strengthens the partnership between Qatar and the United States, and adds that the Middle Eastern country has placed an emphasis on interoperability.

Boeing is in the process of providing pre-delivery pilot training, and will set up and operate an aircrew and maintenance training centre at Qatar’s Al Udeid air base “through 2024”. It will also provide in-country spares and logistics support.

An unspecified number of Qatari F-15QAs will fly to Al Udeid before the end of the year after pre-delivery pilot training is completed.

“Driven by digital engineering and advanced manufacturing, these aircraft represent a transformational leap for the F-15. The F-15QA will enhance the superiority of the [Qatari air force] with more speed, range and payload than any fighter in the world.”

The F-15QA also forms the basis of the developmental F-15EX “Eagle II”, of which USAF is set to obtain up to 144 examples.

Updated with Boeing video and description of weapons loadout, as well as fighter’s name.