The report was published by the China Aerospace Studies Institute and prepared by BluePath Labs. It suggests that a 2012 book by two Chinese hypersonic experts, Cai Guabiao and Xu Dajun, provided at least some structure to China’s subsequent research into fields that pertain to HV development. 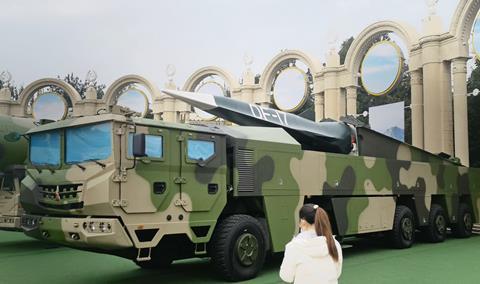 “The public data also suggests that China’s progress is increasingly the result of domestic efforts, rather than international collaboration or scientists who have been trained abroad,” says the report.

“Our analyses indicated that influential younger scientists only spent minimal time abroad and were only involved in a handful of collaborative projects with international institutions and scholars.”

It also indicates that the Harbin Institute of Technology and National University of Defense Technology (NUDT) – both of which are associated with the People’s Liberation Army – play key roles in China’s HV development work.

It lists prominent Chinese HV researchers and their number of collaborations with researchers from both Chinese and foreign universities.

Beijing’s hypersonic technology is of significant concern to the USA and its allies. In its recent report to Congress on China’s military developments, the US Department of Defense (DoD) observes that Beijing continues to develop hypersonic capabilities.

The DoD, citing a Chinese military expert, contends that Beijing has deployed the DF-17 atop a medium-range ballistic missile, and that the system is designed strike bases and fleets in the Western Pacific.

In 2021, the DoD adds, China tested an intercontinental ballistic missile equipped with a hypersonic glide vehicle in a fractional orbital bombardment role. During the test, the vehicle flew 21,600nm (40,000km), with a flight time of 100min.

Such a delivery system would be extremely effective at circumventing conventional ballistic missile defences.