The recent appearance of an operational Chengdu J-10C powered by a domestically produced engine marks a key moment for the single-engined type in the People’s Liberation Army Air Force (PLAAF).

As with so much in Chinese airpower, much of the J-10’s history is shrouded in mystery. It is understood that the type, which originated in the 1980s, traces its lineage to the J-9, a canard/delta fighter that was abandoned in 1980. It is also believed that the J-10 benefited from the 1980s Israel Aircraft Industries Lavi programme. 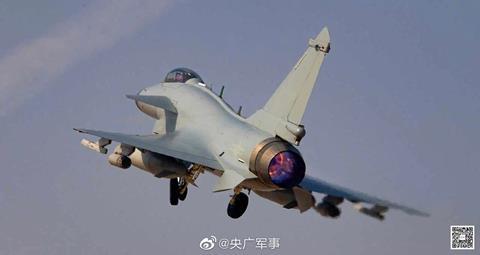 The fighter was regarded as a state secret until January 2007, when official media finally disclosed that it had entered PLAAF service. A few months later, in May 2007, Russia’s Rosoboronexport arms agency announced a $300 million deal to sell 100 Saturn AL-31 engines for China’s planned J-10 fleet. Then, in late 2008, the J-10A made its public debut at Airshow China in Zhuhai.

Since that time, the AL-31 has been the key powerplant for all variants of the J-10, from the original J-10As to the far more advanced J-10Cs. Beijing always had plans for the J-10 to receive a local powerplant, the Shenyang WS-10 Taihang, but the challenges involved in developing aircraft engines forced it to stick with the Russian powerplant longer than planned.

Finally, in early May, it became clear that a corner had been turned: a J-10C in an operational unit was spotted with the WS-10.

As is typical for significant Chinese defence developments, there was no official statement. Rather, a clear image of an operational J-10C with the WS-10 appeared on social media. Beijing’s Global Times also covered a Chinese television report about the appearance of the WS-10-powered J-10C.

Andreas Rupprecht is the author of Modern Chinese Warplanes, an authoritative guide to mainland airpower. He was among the first observers to highlight the new development. He feels the J-10C news is highly significant.

“This cannot be overrated, and in fact is a true milestone not only for the J-10, but even more for the WS-10 programme since it marks an end of the reliance on the Russian AL-31 for all three major PLAAF fighters – at least production examples – namely the J-10C, [Shenyang] J-16 and [Chengdu] J-20,” he says.

He notes that a decade has passed since the J-10B first flew with a WS-10, and that the engine was tested on a J-10A even earlier. Finally, after years of refinement, it appears that the WS-10 is reliable and safe enough to power a single-engined fighter in active service.

Mounted inside the J-10, the WS-10 can be identified by a few subtle features. One is that the afterburner nozzle petals are notably wider on the WS-10 than on the AL-31. The WS-10 also has a ring structure around the interior of the nozzle that is absent on the AL-31. In images at least, the sheen of the alloy used on the WS-10 nozzle is also somewhat lighter than for the Russian engine. 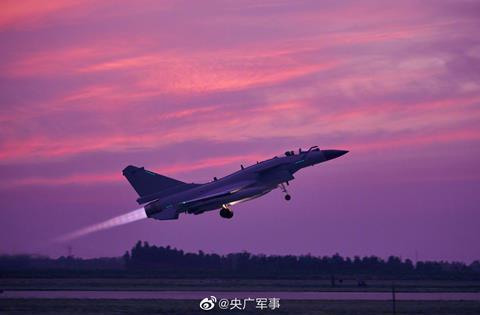 The engine’s appearance with a J-10C continues the long development history of the J-10 programme from the somewhat rudimentary J-10A.

The J-10A, which is flown by China’s August 1st aerobatic display team, can be distinguished from later variants by the rectangular intake that is not flush with the fuselage. The variant was produced until late 2014, when production switched to the J-10B. The J-10As, however, have received updates, including the ability to carry the PL-10 infrared-guided missile.

The J-10B, distinguished by a diverterless supersonic inlet, offers several improvements over the J-10A. These include an infrared search and track sensor, glass cockpit avionics, and a passive electronically scanned array radar. The J-10B was officially unveiled at 2016’s Airshow China, appearing in the static park with the PL-12 beyond-visual-range air-to-air missile. At the 2018 show, a J-10B testbed appeared in the flying display using a WS-10 thrust vector control engine.

The most advanced J-10 variant is the J-10C, which first appeared in a parade in August 2017. While largely identical to the J-10B, it can be distinguished by its slightly different tail, which slopes down from a point – the top of the J-10B’s tail is square. The fighter is equipped with an active electronically scanned array radar and an updated cockpit. It carries a broader array of weapons, including the long-range PL-15 air-to-air missile, which is believed to have a range greater than 107nm (200km).

The J-10 family also has a two-seat trainer variant, the J-10S, a derivative of the original J-10A. 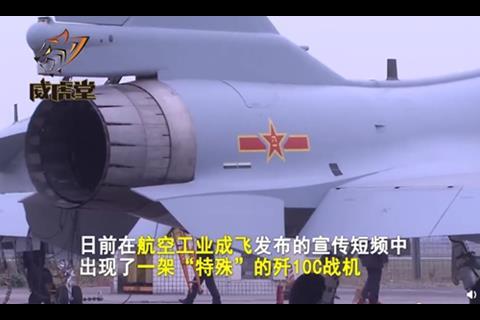 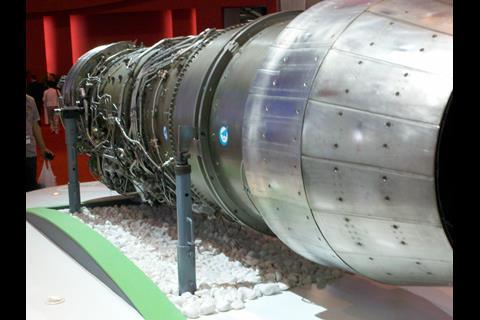 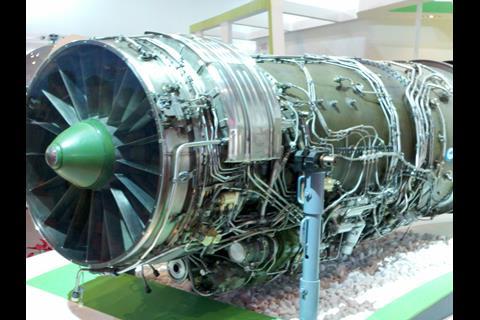 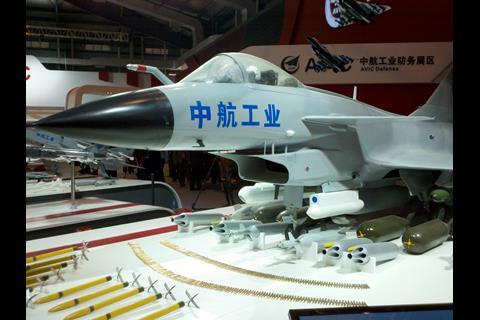 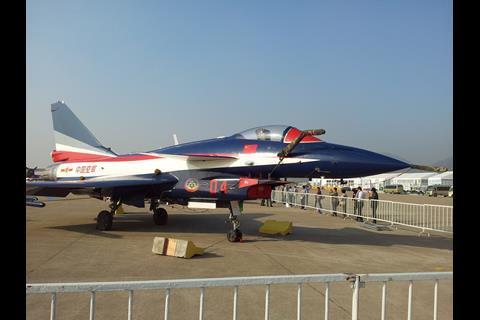 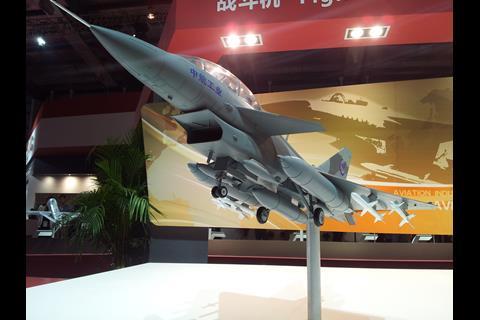 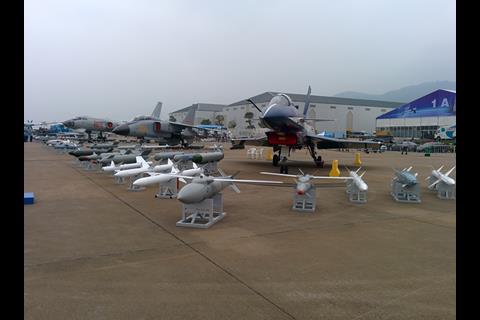 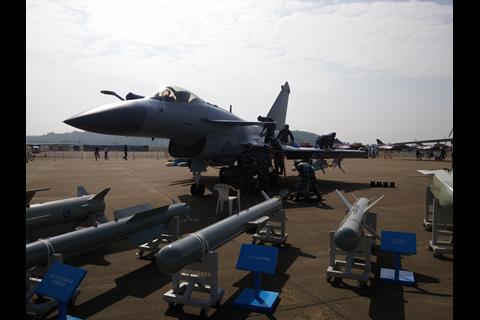 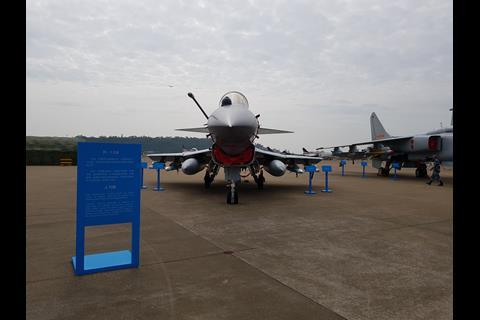 Roderick Lee, research director at the China Aerospace Studies Institute, believes that in a conflict the J-10’s main mission would be air-to-air combat. He notes that photographs of J-10s tend to feature air-to-air munitions more frequently then weapons for ground attack.

Like Rupprecht, he believes the advent of the WS-10 powered J-10C is a significant development.

“The development of turbofan and turbojet engines is a national-level technological development priority,” he says.

“The appearance of a WS-10 on a J-10C as opposed to an AL-31 is a major public milestone for that development effort. That being said, it does not necessarily indicate that the WS-10 performs ‘just as good as an AL-31’, either in terms of thrust, flight hours, or any other technical performance metric. The PLAAF may have been willing to sacrifice something, such as lower flight hours before needing overhaul, in favour of having a domestic engine, although I doubt there was any substantive sacrifice in flight performance.”

He also notes that a fully indigenous engine should simplify logistics and support.

While the J-10 is a key aircraft for the PLAAF, it has yet to secure overseas sales. Since the 2000s there have been rumours that Pakistan will obtain the J-10, but Islamabad is clearly more focused on advancing its Chengdu/Pakistan Aeronautical Complex JF-17 capability. In April, unsourced reports suggested that Iran might be interested in acquiring J-10s to upgrade its ramshackle air force, supposedly offering a barter deal involving oil or natural gas.

Irrespective of whether international sales emerge, the J-10 will be a key fighter in Chinese service through the 2020s, adding force numbers and supporting larger types such as the J-16 and J-20. The arrival of WS-10-powered J-10Cs in operational units marks a critical inflection point in the programme’s development, as well as the growing maturity and confidence of China’s aerospace sector.