A brief video has emerged of a Xian H-6N bomber carrying what could be a ballistic missile or boost-glide vehicle along its centreline.

The video appeared on the Chinese internet on 17 October. It goes some way to confirming a long-held theory that one mission for the H-6N, the most advanced variant of the H-6 family, is lofting ballistic missiles.

The 8s of footage shows the aircraft on short final, flying over a civilian road just before landing. While appearing to confirm one mystery about the H-6N’s mission, the video raises other questions.

Since the H-6N’s appearance in Beijing’s military parade on 1 October 2019, observers have commented on the concavity that replaces the bomb bay seen on previous variants of the H-6. Speculation held that it is designed to carry a single DF-21 anti-ship ballistic missile, or perhaps a hypersonic vehicle of some type, and potentially the DF-17, which appeared on a wheeled launcher during the parade.

The brevity and quality of the video make it difficult to ascertain what, exactly, the H-6N was carrying. One on-line commentator from China posited that the weapon in the footage is somewhat longer than the DF-21.

Roderick Lee, research director at the China Aerospace Studies Institute, tweeted that the airfield in the video could be the People’s Liberation Army Air Force (PLAAF) base at Neixiang. In a recent story he wrote for The Diplomat, Lee said that satellite imagery suggests that Neixiang airfield in Henan Province has been extensively upgraded to support H-6Ns performing a nuclear mission.

The H-6N certainly has the Pentagon’s attention. In its annual report to congress about China in early September, it had this to say about the new variant: “The H-6N features a modified fuselage that allows it to carry externally either a drone or an air-launched ballistic missile [ALBM] that may be nuclear capable. The H-6N’s air-to-air refueling capability also provides it greater reach over other H-6 variants that are not refuelable in air.” 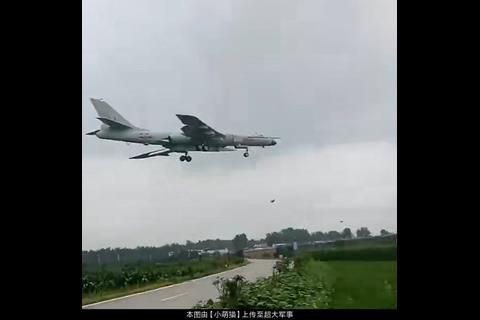 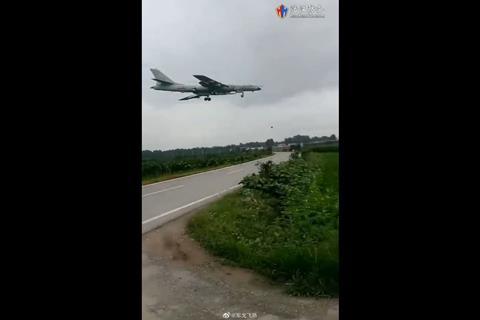 The aircraft could be based at Neixiang. 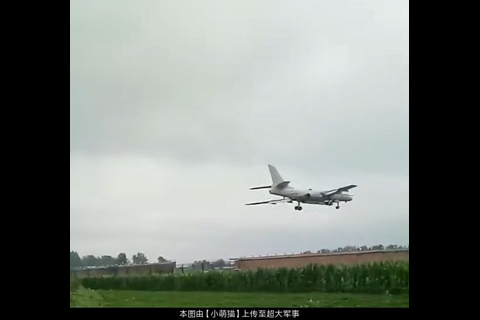 The 0.8s clip marks a key milestone in understand the new H-6N 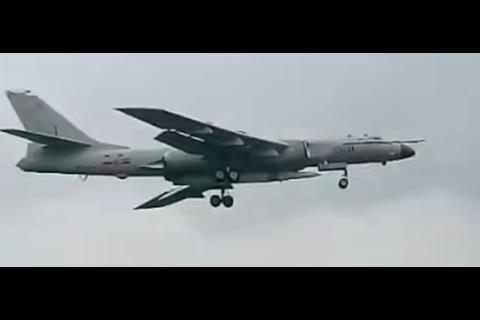 A screen shot from the H-6N video 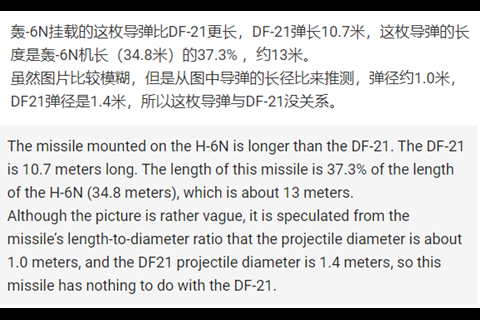 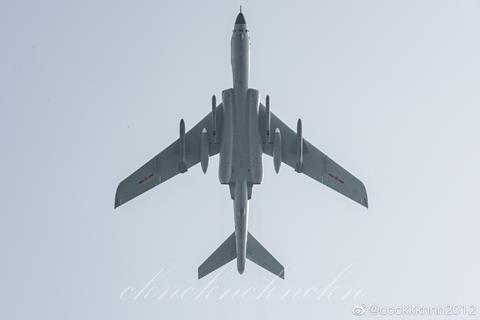 It also said that the advent of the H-6N in the PLAAF marks the return of China’s nuclear triad, under which nuclear deterrence is achieved through a mix of nuclear-capable bombers, ballistic missile submarines, and ground-launched intercontinental ballistic missiles.

It is far from clear if the weapon seen under the aircraft has been tested, or if the aircraft in the video was involved in captive carry tests.

Another high-profile – and far more publicity friendly – example of rockets launched by aircraft is Virgin Orbit, which aims to launch small satellites into orbit from a Boeing 747-400. The company’s Youtube channel offers some sense of the challenges involved in lofting rockets from aircraft.

Virgin Orbit conducted its first captive carry flight in November 2018, with the first drop test taking place seven months later in July 2019. The first launch, a failure, only took place in May 2020.

One point raised in Virgin Orbit’s publicity material is that by using 747s it can conduct launches from runways around the world. Similarly, H-6Ns with ballistic missile capabilities could be deployed from air bases and airports across China, thereby improving survivability in a conflict. It could also be deployed to bases beyond China.

So far, the H-6N has likely only been produced in small numbers. It could be some years before the H-6N/ALBM combination becomes a mature capability. If one H-6N/ALBM mission involves attacking highly mobile targets, such as warships, its success will rely upon a highly redundant, fast-acting kill chain that can detect targets, track them, and provide quality targeting data in a timely manner.

Irrespective of the challenges Beijing may face with this ambitious project, the new H-6N footage is a clear milestone in the world’s understanding of its strategic intentions.