Collins Aerospace and a US Air National Guard (ANG) unit have demonstrated the potential of a new networked command and control function, showcasing the technology’s benefits during a test flight with a uniquely-adapted Boeing KC-135 tanker.

Launched from Salt Lake City, Utah on 7 August, the test was conducted in support of the US Air Force’s (USAF’s) broader Combined Joint All Domain Command and Control (CJADC2) and Advanced Battle Management System (ABMS) initiatives. 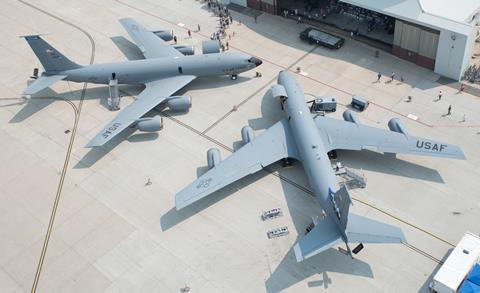 “Almost all of the technology demonstrated on ANG KC-135s can be transferred to other MAF [Mobility Air Forces] aircraft at a much lower programme risk level,” notes 151st Operations Group commander Colonel Douglas Foster. Examples could include the USAF’s Boeing KC-46A tanker, and Boeing C-17 and Lockheed Martin C-130 transports.

“We’ve got the technology infrastructure to provide both command and control elements and those executing the mission from the cockpit with the actionable intelligence that’s so critical to the success of CJADC2 and ABMS,” says Elaine Bitonti, Collins’ vice-president, CJADC2 demonstration and experimentation.