A bloc of lawmakers in Washington DC say they want the Department of Defense (DoD) to continue funding research into advanced-aircraft propulsion technologies.

In a letter sent to US Secretary of Defense Lloyd Austin on 7 October, 49 Senators and Members of Congress say the USA “must continue to develop and field advanced-propulsion systems”. 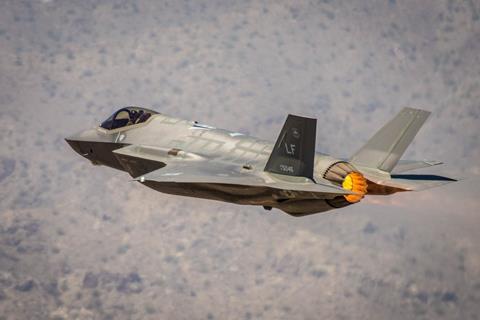 The letter refers to so-called adaptive engines, a type of aircraft propulsion system that combines the power and thrust of a traditional fighter engine with the fuel efficiency of a commercial jet turbine. Lawmakers say adaptive engines will be necessary to support Washington’s Indo-Pacific strategy by enabling American aircrews to “complete their mission and return home safely”.

The legislators, including several members of the House and Senate committees responsible for approving government spending, used the letter to formally request the DoD include funds for adaptive-propulsion research and development in its fiscal year 2024 budget, which the Pentagon is currently preparing.

The letter comes after John Sneden, who oversees the propulsion directorate of Air Force Materiel Command, warned in August that the USA risks falling behind in development of advanced propulsion systems. “The reality is, we’re essentially stagnating, and we’re starting to lose,” said Sneden.

He called on the DoD and Congress to direct more funds to the country’s propulsion industrial base, to support engineering and development of adaptive engines.

The USAF has already been funding development of an adaptive engine for Lockheed Martin’s F-35 Joint Strike Fighter, providing roughly $1 billion each to Pratt & Whitney and GE Aviation under the Adaptive Engine Transition Program (AETP).

GE says it recently concluded that contract, having finished testing its XA100 powerplant in September. However, concerns over the cost of retrofitting the USAF’s F-35A fleet with AETP engines have cast doubt on their adoption.

P&W, which produces the jet’s current powerplant, has thrown its support behind a cheaper upgrade to the existing system, which the company calls the Enhanced Engine Package.

Air force chief of staff General Charles Brown recently said the service aims to chose an F-35 engine-update path by the end of this year.

Shortly after Sneden’s remarks in August, the USAF announced a programme that could provide up to $5 billion to US manufacturers for development of advanced powerplants.

The Next Generation Adaptive Propulsion (NGAP) initiative awarded five contracts, each worth $975 million, to GE, P&W, Lockheed, Northrop Grumman and Boeing, to fund research and development of propulsion systems for “future air-dominance platforms”.

The USAF tells FlightGlobal NGAP will “build upon the technologies matured under [AETP]” to deliver propulsion options for its secretive sixth-generation air superiority platform, known officially as Next Generation Air Dominance (NGAD).

Whether funding for adaptive propulsion beyond NGAP will make the FY2024 budget remains unclear, with senior Pentagon officials declining to reveal details of their still-under development request.

Congress could ultimately decide to earmark money toward that end, regardless of the DoD’s inclination.

Under the US government’s budgeting process, agencies within the executive branch prepare annual budget requests, which are then submitted to Congress for consideration. Lawmakers will often make revisions to those requests, adding funding for their preferred programmes or attempting to reduce the budget for initiatives they oppose.