US Air Force (USAF) General Kenneth Wilsbach says that the Boeing E-3 Sentry AWACS fleet is suffering significant obsolescence issues, and that the Boeing F-15EX is ideally suited to conflict in North Asia.

Wilsbach, the Pacific Air Force’s (PACAF’s) commander, says that he has been advocate of the Boeing 737-based E-7 airborne early warning and control aircraft for some time. 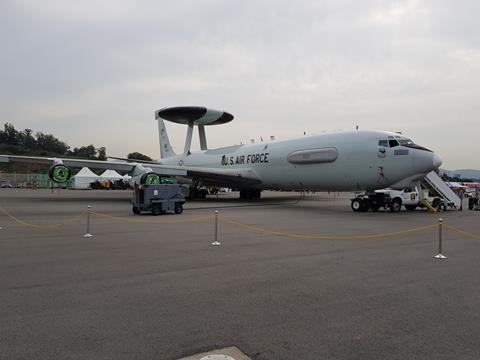 “Our E-3 fleet really struggles from a maintenance reliability standpoint,” says Wilsbach. “We have four of them in PACAF and often times all four of them are not able to fly because of maintenance issues.”

The E-3’s issues are frequently basic, having to do with the aircraft’s electronics, hydraulics, and engines. He also expressed doubt about the type’s viability in the modern battlespace.

“When it gets airborne, those sensors that we rely on with the E-3 aren’t really capable in the 21st century fight, especially against a platform like the [Chengdu] J-20 or something similar to that. It just can’t see those platforms far enough out to be able to provide an advantage to the shooters.”

As for the E-7, which is operated by regional US allies Australia and South Korea, Wilsbach says it is both more capable and reliable. The USAF is considering a potential E-7 acquisition.

Wilsbach made the remarks in a YouTube video posted by the Mitchell Institute for Aerospace Studies.

During the video a reporter asked Wilsbach about the large number of older F-15Cs based in Japan.

“They are old and it is a likely time to get them replaced… I’ve been advocating for the F-15EX,” says Wilsbach.

He says that he has flown the F-15EX and was “extremely impressed”.

Equipped with conformal fuel tanks, the F-15EX would be able to stay airborne for 3-4h without tanker support.

“That gives you quite a range capability when you’re carrying a lot of weapons.”

In addition to air-to-air missiles, the F-15EX can carry air-to-surface weapons such as the Lockheed Martin AGM-158 JASSM (Joint Air-to-Surface Standoff Missile). It will also be able to carry future long-range hypersonic weapons that cannot be accommodated internally by a stealth fighter.

Wilsbach also sees a major role for unmanned, ‘attritable’ systems in any conflict against China. He notes that Beijing has developed extensive defensive capabilities, and that it makes sense to swamp these with large numbers of cheaper assets that the USAF can afford to lose.

“Some of them may be stealthy, some of them should be not stealthy, because if it’s stealthy, and they can’t see them, then they can’t shoot at them,” he says. “So there should be a mix of all of this as we go forward to present many more dilemmas than they can handle at any given time.”

Exercises suggest that the massing of such aircraft against a particular target means that while some may get show down, “it’s the weapon that creates the final effect that counts”.