Europe’s Eurofighter partner nations have finalised a deal worth almost €300 million ($354 million) to deliver a package of weapon, avionics, communication system and self-protection enhancements for the multi-role type.

The Eurofighter consortium, which signed the contract with the NATO Eurofighter and Tornado Management Agency (NETMA) on behalf of Germany, Italy, Spain and the UK on 6 August, says the move “provides the next steps in the capability evolution” for the Typhoon. 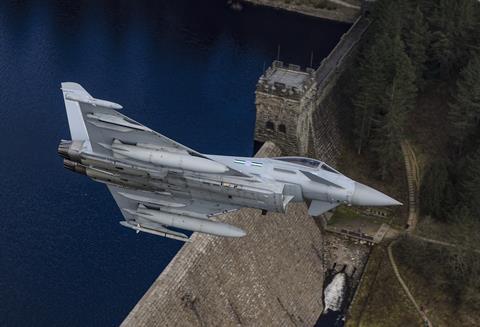 Formally named Consolidation Package Step Two and Three, Phase 1, this includes extending the use of MBDA’s Meteor beyond-visual-range air-to-air missile from the Eurofighter’s current mechanically-scanned radar to a new active electronically-scanned array (AESA), or E-Scan, European Common Radar System. All four nations have programmes in place to incorporate the AESA technology with all or part of their fleets.

“The contract strengthens both the air-to-air and air-to-surface capabilities of the weapon system, and rolls these updates out across the whole fleet,” it adds.

In addition to meeting the requirements of the European partner nations, the consortium says the enhancements “will equally benefit export customers, creating a consistent harmonised package as the baseline for ongoing capability development”.

“This package of developments makes the weapon system performance more effective and versatile for our end users, with improvements to individual capabilities being rolled out across the whole fleet of M-Scan and E-Scan aircraft,” says Eurofighter chief executive Herman Claesen.

It also “provides an important building block for further developments to come”, according to NETMA deputy general manager Ruediger Knoepfel.

Eurofighter notes that the initial €300 million commitment will be followed by a second-phase award to be placed in mid-2022. “The programme launched with industry pre-funding because the industry partners recognised the importance of this work,” it says.

The work will be performed by industry partners Airbus Germany, Airbus Spain, BAE Systems and Leonardo, along with the EuroDASS and EuroRadar groupings.

Eurofighter says that changes to the Typhoon’s cockpit displays are the result of operator feedback, and will “improve the pilot and machine interaction”. BAE – which had funded work on new large touchscreen displays in support of the effort – says these will enable pilots “to assess and respond to increasing volumes of data from the aircraft’s sensors and datalinks”.

BAE values its part of the deal – named Phased Enhancement Package 3c – at approximately £135 million ($188 million), and says work will conclude by the end of 2024.

Richard Hamilton, Typhoon programme director, Europe for BAE Systems Air, notes that the contract “will help to keep the UK skill base at the forefront of the global combat air sector and sustainable skills required to deliver the next generation future combat air system.”

Along with Rolls-Royce and the UK units of Leonardo and MBDA, BAE forms Team Tempest, which is tasked with developing the UK’s next-generation combat air capability. Italy and Sweden are also supporting the Tempest programme, which recently moved into its concept and assessment phase.

Cirium fleets data shows that there are 515 Typhoons in current active service with the air forces of Austria, Germany, Italy, Oman, Saudi Arabia, Spain and the UK, with the type also in production for future operators Kuwait and Qatar.