The work follows a series of developmental tests to ensure the fighter meets build specifications and safety standards, says the US Air Force (USAF). The type also participated in exercise Northern Edge in Alaska. 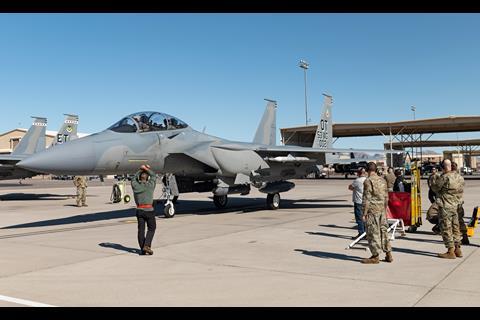 An F-15EX pulls into the chocks next to another F-15EX at Nellis AFB, Nevada. 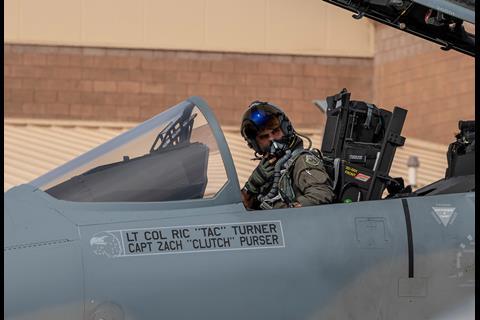 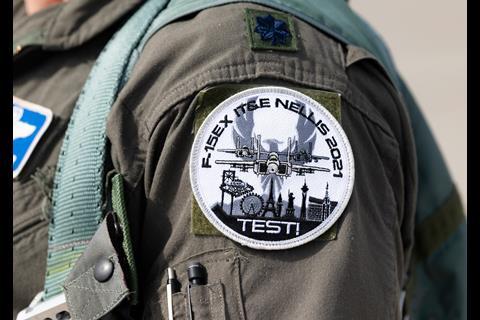 An F-15EX Eagle II assigned to the 85th Test and Evaluation Sqn, lands at Nellis AFB, Nevada on 15 October.

The USAF has just two F-15EX fighters, which were delivered earlier this year. The overall USAF programme of record is for 144 examples.

“We’ve never done full, large-scale operational tests with the F-15EX, because it’s only been in the US Air Force’s hands for six months,” says Lieutenant Colonel Kenneth Juhl of the Air Force Operational Test and Evaluation Center.

“The fact that we’re going this fast in operational test is definitely owing to the chief of staff of the air force’s accelerate, change or lose mentality.”

A focus of the Nellis work will be assessing the aircraft in a challenging threat environment, which will inform the USAF’s view of what the F-15EX is capable of when it enters active service. The aircraft will operate both at day and night, in the defensive and offensive counter air missions.

A focus will be understanding the differences with the legacy ‘C’ model, which has been in USAF service since the 1970s. Unlike the ‘C’, the F-15EX has fly-by-wire flight controls.

Another focus of the work will be testing the fighter’s BAE Systems Eagle Passive Active Warning Survivability System (EPAWSS).

“The EPAWSS system is the next-gen advanced electronic attacks as well as electronic protects system that the EX and Strike Eagles are currently testing and developing and hopefully fielding in the relatively near future,” says Major Kevin Hand of the Air National Guard-Air Force Reserve Test Center.

“That’s going to give us the ability to essentially go into some of these more advanced threats or aerial denial kind of situations where we can now self-protect and self-jam our way through.”

The USAF views Nellis AFB as ideal for the F-15EX work given its air-to-air and surface-to-air training range. The range allows for instant feedback on aircraft performance.

“The more situations that we can put this airplane in the better information we learn,” adds Juhl. “That integration is probably the key thing in the air force, to be able to get multiple different kinds of fighters to work together, to be a more formidable force.”