The Lockheed Martin F-35A has operated a flight test involving the dropping of a mock B61-12 nuclear bomb.

The work took place at the Tonopah Test Range, and was conducted by Sandia National Laboratories. It was the first in a series of tests to assess the type’s ability to drop the weapon. 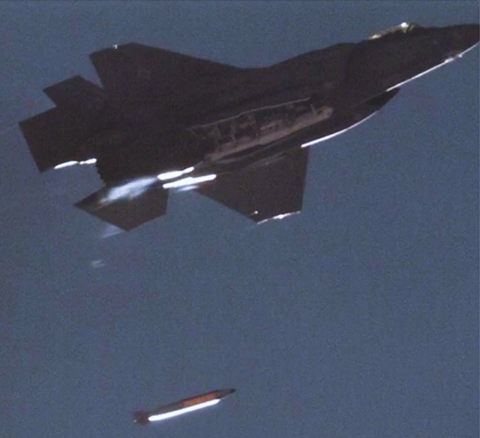 The aircraft, travelling faster than the speed of sound, dropped the inert weapon from 10,500ft. The weapon hit the designated target area 42s later.

“We’re showing the B61-12’s larger compatibility and broader versatility for the country’s nuclear deterrent, and we’re doing it in the world of Covid-19,” says Sandia executive Steven Samuels.

“We’re not slowing down. We’re still moving forward with the B61-12 compatibility activities on different platforms.”

The inert weapon took 42s to reach the ground

This was the first time a B61-12 was dropped from the internal weapons bay of a fighter. It was also the first time the weapon was released at a speed greater than Mach 1.

“The latest test is a critical piece in the F-35A and B61-12 programme,” adds Samuels. “Aboard the newest fighter, the B61-12 provides a strong piece of the overall nuclear deterrence strategy for our country and our allies.”