Boeing’s Defense, Space & Security unit continues to battle programme headwinds, with its second-quarter revenues having declined to just below $6.2 billion, from approaching $6.9 billion during the same period a year earlier. Orders were worth $2 billion. 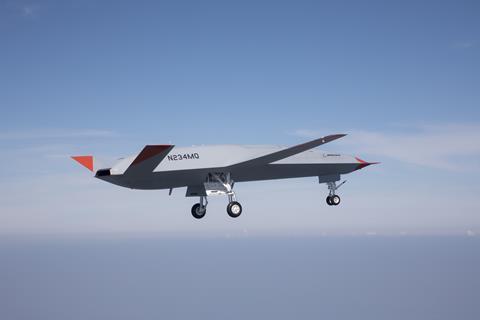 Detailing its operating performance, Boeing on 27 July said the defence unit’s margin slump was “primarily driven by charges on fixed-price development programmes… as well as unfavourable performance on other programmes and lower volume on derivative aircraft programmes”.

Speaking during an earnings call, chief financial officer Brian West said around $400 million in total charges were taken against fixed-price defence contracts during the quarter.

The MQ-25 Stingray unmanned tanker accounted for $147 million of this total, “primarily due to higher costs to meet certain technical requirements”. A $93 million charge also was encountered on the Commercial Crew space programme, related to “launch manifest updates” and additional costs associated with the OFT-2 flight test of its Starliner spacecraft.

There also was “relatively small cost growth” on the T-7A Red Hawk advanced jet trainer, KC-46A Pegasus tanker and 747-8I-based VC-25B Air Force One fleet recapitalisation, “with no one programme impacting by more than about $50 million”, West says. “The drivers were largely supply chain impact and inflation,” he adds.

Those three programmes had caused cost over-runs worth a combined $1.1 billion during the first quarter of this year.

“We continue to work through hurdles on our fixed-price development programmes amidst a challenging macro-economic environment,” chief executive David Calhoun wrote in a results-day message to employees.

Meanwhile, Boeing delivered 40 military aircraft during the three-month period, down three versus the same quarter in 2021. They included 19 AH-64 Apaches (13 remanufactured and six new-build examples), six CH-47 Chinooks (five new and one ‘renewed’), four each of the F-15, F/A-18E/F Super Hornet and KC-46A Pegasus, plus three 737NG-based P-8A Poseidons.

Boeing says the defence unit had an order backlog worth $55 billion at the end of the second quarter, “of which 33% represents orders from customers outside the US”.