FlightGlobal caught up with HMS Queen Elizabeth during a short port call in Singapore, following its extensive deployment in North Asia as part of the Carrier Strike Group 21 deployment.

The 65,000t vessel’s recent visit to the city-state marked the first time in years that a Royal Navy (RN) aircraft carrier called at the former British outpost. 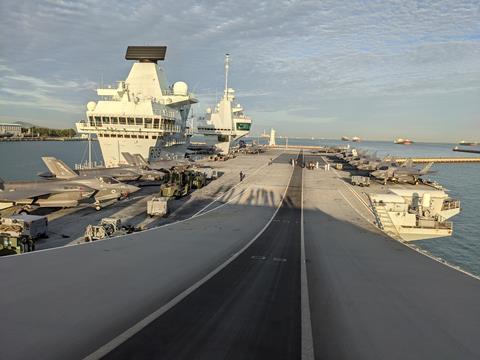 Looking down the ramp of HMS Queen Elizabeth. F-35Bs start their take-off run just beyond the group of people halfway down the deck

The vessel had passed through the Singapore Straits in late July, but continued on to North Asia, where the RN had a busy schedule of exercises with regional allies including Australia, Japan, New Zealand, South Korea and the USA. Prior to arriving back in Singapore, the carrier exercised with the Republic of Singapore Navy, with its Lockheed Martin F-35Bs working with Republic of Singapore Air Force Lockheed F-16s.

Given concerns about the coronavirus pandemic, the ship’s crew was restricted to the vessel during the stay in Singapore. After testing negative for Covid-19, visitors to the ship were issued N95 masks and rubber surgical gloves.

The strike group’s commander, Commodore Steve Moorhouse, told a media gathering on the ship that cooperation and interoperability of the RAF and USMC F-35Bs has been excellent.

“As a commander, I’m almost blind to who’s flying it,” he says. “I ask for F-35s, and I don’t care which squadron they are coming from.” 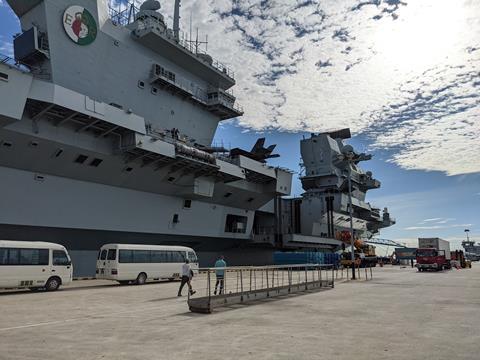 This also carries over to the maintenance realm, where spare parts are shared between the RAF and USMC – in some cases, spares have come from other allied vessels. That said, USMC and RAF engineers do not work on each other’s aircraft, mainly owing to permissions specific to the US and British governments. Moreover, US Navy weapons loaders are present aboard Queen Elizabeth owing to differences in the weapons that USMC aircraft carry versus their RAF counterparts. Industry representatives are embarked to support both squadrons.

Moorhouse says learnings have travelled both ways. The RN and RAF have benefited from the USMC’s experience with operating F-35Bs at sea. The USMC, in turn, has learned about operating aircraft from a British carrier. Moorhouse says sustainment has gone well and that readiness rates are good.

He notes that the F-35B, with its short take-off and vertical landing (STOVL) capability, can pretty much operate from any flat top – even those from other nations.

“What we’ve also seen out here is the flexibility of the F-35B… where if you’re operating a big deck with F-35B, any nation can come and go, so you’ve got this incredible flexibility.”

Although the STOVL-capable F-35B as well as the F-35A (conventional take-off and landing) and F-35C (catapult assisted take-off but arrested recovery) are becoming more commonplace, there was considerable sensitivity around the low-observable type aboard Queen Elizabeth. 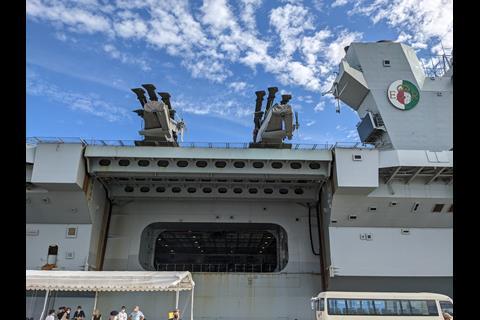 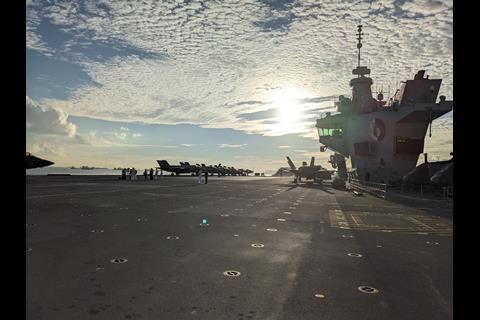 Displacing 65,000t, HMS Queen Elizabeth is the largest vessel ever to serve with the Royal Navy 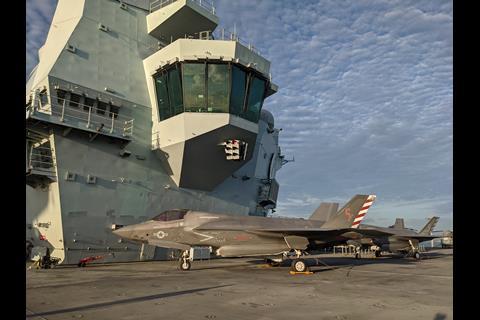 A USMC F-35B under FLYCO 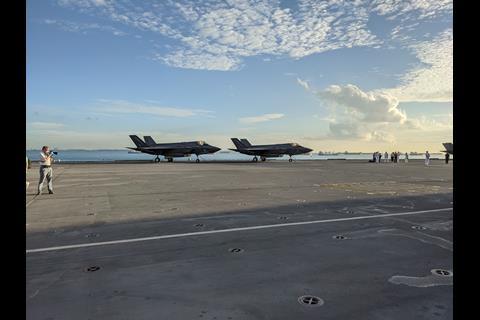 A pair of RAF F-35Bs aboard HMS Queen Elizabeth 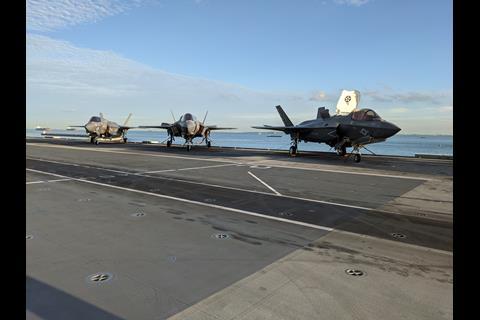 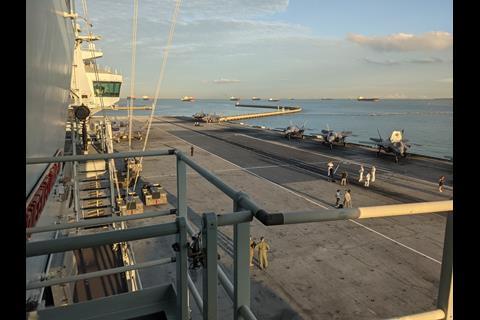 Looking toward the stern of HMS Queen Elizabeth from the bridge 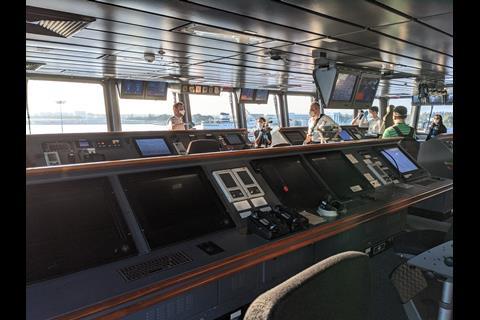 On typical aircraft carrier tours, visitors are free to wander up to aircraft and snap close-up pictures. Aboard the Queen Elizabeth, however, visitors were asked to keep a respectful distance from the F-35Bs, particularly when taking photographs. An “F-35B Photography Guide” in the media kit indicated sensitive areas that should not be directly photographed, such as the intakes, cockpit, lift-fan, and the rear of the engine. On deck, every F-35B engine intake was covered, as was the interior of the thrust nozzle. Pictures were not allowed in the hangar bay, where a few aircraft were undergoing maintenance.

Eighteen F-35Bs are embarked on the Carrier Strike Group 2021 deployment, but the vessel can carry up to 36. An RN officer suggests that 36 fighters probably will not be part of the vessel’s typical load out. Such a large contingent of embarked jets would have a considerable support footprint. Still, the two main elevators can load a pair of F-35Bs each, supporting the rapid movement of aircraft down to and up from the hangar bay as necessary.

Another hallmark of Queen Elizabeth are the large display screens on her flight deck and in the hangar bay. These inform the deck crew about air movements, such as which aircraft is about to take-off or land. During the day the lettering is green, but this switches to red for night operations.

The vessel’s deck has a special coating that one officer says is “extremely expensive”. It is designed to cope with – and rapidly dissipate – the high temperatures generated by the downward-directed jet wash from landing F-35Bs. The deck coating is so effective at dissipating heat that flight deck crew can safely walk across the landing area after a fighter arrives.

During a media briefing aboard the ship Moorhouse was pressed about any encounters with Chinese forces during Queen Elizabeth’s voyage in the region. He says that while Chinese units were sometimes in the task force’s vicinity, they kept a distance and behaved “professionally”. 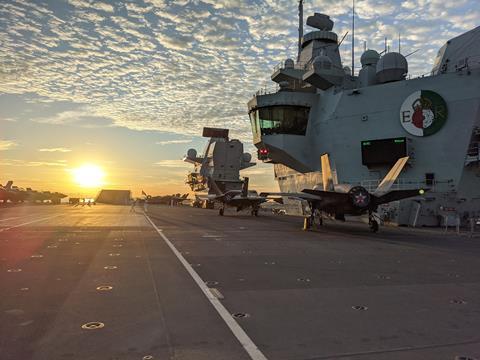 After leaving Singapore,  HMS Queen Elizabeth will head to the Andaman Sea via the Straits of Malacca

RAF chief of the air staff Air Chief Marshal Sir Mike Wigston, who spoke with Moorhouse aboard the ship, adds that the RAF now operates similar types to air forces in the region. These include the F-35, as well as assets such as the Airbus Defence & Space A330 multi-role tanker transport, A400M tactical transport, and Boeing P-8A Poseidon maritime patrol aircraft. These fleet similarities are consistent with the UK’s desire to play a greater role in the Asia-Pacific.

Following its short visit to Singapore, Queen Elizabeth will head back through the Straits of Malacca to the Andaman Sea and beyond. The Carrier Strike Group is expected back in the UK well before Christmas.