How carrier strike deployment is flying the flag for UK trade

With the Royal Navy’s (RN’s) Carrier Strike Group 21 (CSG21) deployment now set to enter its Indo-Pacific-region phase, the UK will be using the activity to strengthen both its military and trade relations with existing allies and potential new partners.

Representing an inaugural operational commitment for the RN’s first of two new aircraft carriers, CSG21 is an eight-month-long undertaking. Lockheed Martin F-35Bs from the Royal Air Force’s 617 Sqn and the US Marine Corps’ (USMC’s) Marine Fighter Attack Squadron 211 are embarked aboard HMS Queen Elizabeth, and on 18 June conducted their first strikes from the ship, against Daesh targets in the Middle East. 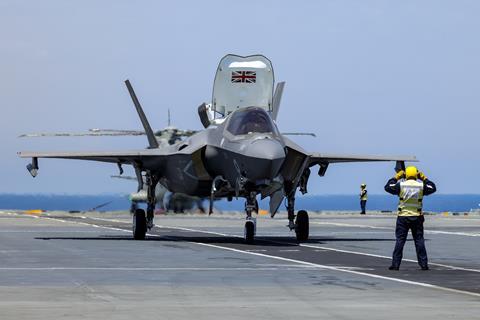 Also involving additional UK vessels and surface ships from the Netherlands’ and US navies, CSG21 has also involved joint NATO exercises in the eastern Atlantic and Mediterranean, for example alongside the French navy’s aircraft carrier Charles de Gaulle, and sent escort vessels to visit Georgia, Romania and Ukraine in the Black Sea region.

The RN says the fleet is currently in the Gulf of Aden, where it has been involved in manoeuvres alongside USMC, US Navy and Japanese navy assets.

“Partnership and solidarity is the central theme of this deployment,” CSG21 commander RN Commodore Steve Moorhouse said during a virtual Farnborough Connect conference session on 13 July.

Describing the “convening power of Carrier Strike” for strengthening the UK’s military and trade relations around the globe, Moorhouse says the activity “reflects the United Kingdom’s continued commitment to global security”.

“The point of this [deployment] is to test the entire package, including interactions with navies and air forces around the world,” says Nick Pett, deputy director of the UK Ministry of Defence’s (MoD’s) CSG21 policy and communications unit.

Asked how the UK expects Beijing and the Chinese navy to respond to the fleet’s arrival in the Indo-Pacific region, Pett notes that London’s intention is for its presence to be “confident, but not confrontational”.

Russia reacted angrily when the RN’s Type 45 destroyer HMS Defender left the group and sailed through international waters off the coast of Ukraine late last month, with Moscow viewing the manoeuvre as an aggressive act staged close to its annexed region of Crimea.

“We know that trade, security and prosperity are inextricably linked,” Kent says. “We are going to be using the carrier to further stimulate progress and dialogue on future trade opportunities for the UK.” Looking at the Asia-Pacific region specifically, he adds: “It is essential that we increase our access to these important global markets.” 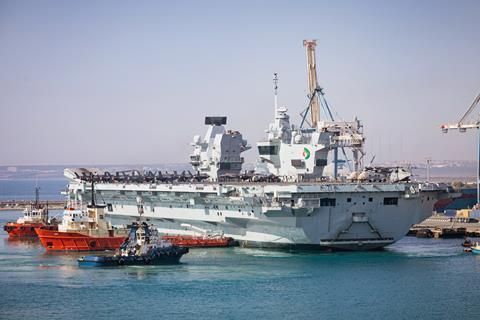 Meanwhile, Elizabeth Baker, Thales UK’s business development director – export, describes the CSG21 deployment as like a “floating exhibition”. The company has supplied equipment ranging from sonar and communication systems aboard RN vessels to Martlet air-to-surface missiles being carried operationally by the service’s Leonardo Helicopters Wildcat rotorcraft for the first time.

Pett also expects that the current joint operation of short take-off and vertical landing F-35Bs from HMS Queen Elizabeth will have enduring benefits.

“Learning from each other will guarantee that we eliminate the worst of the practices that people have got used to over time, but also take the best stuff that people have accumulated,” he says. “Both the UK and US F-35 force will be immeasurably better as a result of having done that.”