Indonesia appears to be interested in 15 Eurofighters that are now part of the Austrian air force inventory. 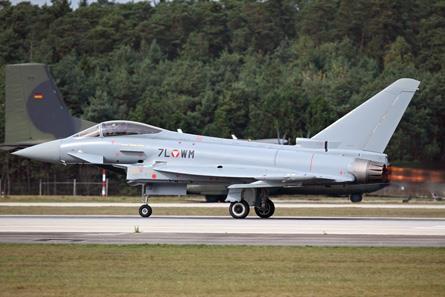 Copies purported to be of the letter soon emerged on social media. In it, Subianto writes that to help modernise the Indonesian air force he would like to enter “official deliberations” to buy all 15 examples.

“I am fully informed concerning the Eurofighter topic and the impact it had until today in Austria, and I am entirely aware of the sensitivity of that matter,” he adds. “Nonetheless, I am sure that my proposal offers a promising change for both sides.”

Munich’s deal for 15 Eurofighters was mired in controversy. In February 2018, Airbus agreed to pay a $99.5 million fine to conclude a six-year-old investigation by the Munich Public Prosecutor into allegations of bribery involving the 2003 sale of the Typhoons.

The settlement allowed Airbus to resolve the investigation with no finding that the company had bribed Austrian officials directly or through intermediaries to select the Eurofighter over other bidders.

In 2017, Vienna said it would retire its of fleet Tranche 1 jets in 2020 amid a row with the four-nation consortium over the cost and capability of its aircraft.

Cirium fleets data lists all 15 jets as still being in service, with an average age of 13.5 years.

For several years Jakarta has been shopping around for new fighters. In November 2019, Indonesian state news agency Antara quoted the air force chief of staff Marshal Yuyu Sutisna as saying that two squadrons of Lockheed Martin F-16Vs would be obtained, and that a long delayed deal to buy Sukhoi Su-35s would go through.

In August 2017, Jakarta said it would buy 11 Su-35s for $1.14 billion; a cash and barter deal that would likely include a mix of local farm products such as palm oil and coffee. However, concerns about USA’s CAATSA (Countering America’s Adversaries Through Sanctions Act) legislation against Russia, Iran and North Korea appear to have made Jakarta think twice about buying Russian aircraft.

Jakarta is also junior partner in the Korea Aerospace Industries KF-X fighter programme, although it continues to squabble with Seoul about costs related to the type’s development.

News of Jakarta’s interest in used Eurofighters emerged two weeks after a surprise announcement by the US government that Jakarta had been cleared to buy eight Bell Boeing MV-22 Block C Osprey tiltrotors in a deal valued at $2 billion.