“The KC-390 Millennium new generation multi-mission medium airlifter has successfully concluded the testing campaign for gravity airdrop and extraction drop of heavy loads by the use of the Container Delivery System (CDS) and Low Velocity Air Drop (LVAD), respectively,” says Embraer in a statement. 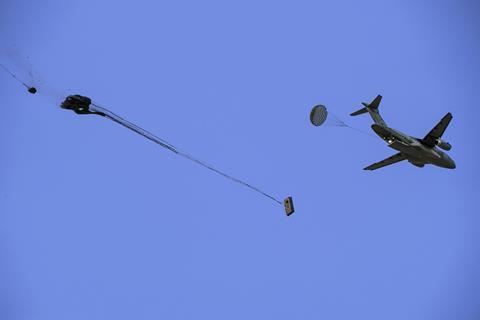 The drop tests were conducted at the US Army’s Yuma Proving Ground in Arizona. Key achievements included the airdrop of a 19t single platform, and the sequential aerial delivery of two platforms weighing a total of 24t.

“Based on these results, the KC-390 Millennium becomes the only medium airlifter able to perform such extreme operation,” says the company.

The 2019 campaign also saw the delivery of 24 containers in one pass. Embraer adds that the aircraft’s fly-by-wire control system is effective at handling pitch and altitude changes both during and after each load release.

At the Dubai air show in November, Boeing and Embraer rebranded the KC-390 as the C-390 Millennium to emphasise the transport’s cargo mission.The companies also announced that their defence joint venture set up to sell the KC-390 will be branded as Boeing Embraer – Defense. The two firms announced their joint venture in 2018.

They added that they will sell an aerial refuelling version of the transport that will retain the KC-390 designation.