Finland has picked the Lockheed Martin F-35A to replace its fleet of 62 aged Boeing F/A-18C/D Hornet fighters under its HX requirement. 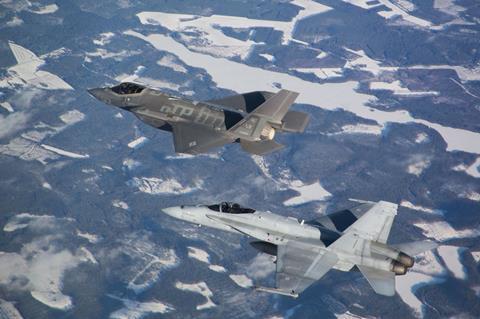 Deliveries are due to begin in 2025, with the initial aircraft supporting training of Finnish air force pilots in the USA. F-35As will begin arriving on home soil from 2026, replacing the Hornet fleet over the 2028-2030 period.

“The current Hornet fleet will be decommissioned as planned from 2025 onwards,” says the defence ministry.

He says the fifth-generation fighter scored highest of any of the contenders in military capability assessments, citing its multi-domain capabilities and sensor networking as key attributes.

The F-35A came first or shared the top score in all mission areas, and had the highest overall score, significantly ahead of its rivals, Finnish air force officials say,

Helsinki adds that during the procurement process “it has been possible to agree on several special security of supply requirements that are crucial from Finland’s point of view and significant industrial co-operation, which is especially related to the ability to operate independently in exceptional circumstances,” it says.

Development of the F-35A’s capabilities have also been guaranteed in to the 2060s, the defence ministry says.

“We are honoured the government of Finland, through its thorough, open competition, has selected the F-35, and we look forward to partnering with the Finnish Defence Forces and Finnish defence industry to deliver and sustain the F-35 aircraft,” says Bridget Lauderdale, Lockheed Martin vice-president and general manager of the F-35 progamme.

The F-35 offer included numerous munition types including AIM-9X, JSM and JASSM-ER missiles, it says. However, the weapons package will be “refined during the procurement process, taking into account, among other things, the availability of the latest types of weapons and the development of the operating environment.”

Finland will pay €4 billion for the aircraft, €755 million for weapons, and €3 billion for equipment, spares and training over the 2025-2030 period. A further €777 million is allocated for infrastructure improvements.

“The F-35 was the cheapest in terms of purchase price, taking into account all the parts included in the bid. The operating and maintenance costs of the system are below the set annual cost limit of €254 million,” says the ministry.

A 2020 Foreign Military Sales approval notification from the US Defence Security Cooperation Agency valued the F-35A package, which included training, logistics, spares and weapons was valued at $12.5 billion.

Saab says it “respects Finland’s decision although the outcome is not the one we sought and fought hard for”.

“Finland is and will remain an important partner and market for Saab, both with our existing programmes and future opportunities.”

Boeing says it is “disappointed” by Finland’s decision, but is confident the Super Hornet and Growler will secure additional international orders.

A letter of request from Germany covering the possible acquisition of a combined 45 F/A-18E/Fs and EA-18Gs is expected early in 2022.