Launched at the World Defense Show in Riyadh on 7 March, the new design is a response to the growing and evolving threat posed by hostile drone operators. A quadcopter-type model with two 90cm-diameter wings, the 10kg (22lb) interceptor will engage targets at subsonic speed using only kinetic force, explains MARSS chief executive Johannes Pinl. 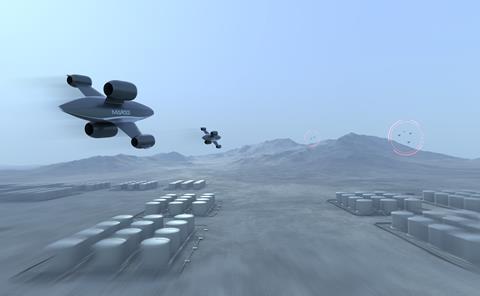 A drone strike launched against a Saudi facility eight years ago prompted interest in developing a more capable means of protecting such sites, he says.

“The issue is: you need to protect your critical infrastructure in the middle of urban areas – you can’t put a missile system in the middle of a city,” Pinl notes. “How do you counter such a drone threat without creating more collateral damage?”

To be operated in concert with MARSS’ existing NiDAR counter-UAS command and control technology – which combines radar with visual and thermal imaging cameras and jamming technology – its interceptor is equipped with an imaging infrared seeker.

Deployed vertically from a launch tube before transitioning to forward flight, the design can engage multiple small, Category I air vehicles in one sortie, or make a single engagement against a larger, Category II system via a “hard kill” manoeuvre.

Target engagement involves striking a drone at its weakest point – typically an engine or propeller. MARSS cites a head-on engagement range of more than 2.7nm (5km) and an operating speed of over 80m/s, with an endurance of less than 10min. Should it miss its intended target, Pinl notes that the interceptor has enough of a speed advantage to be able to turn around and make a fresh attempt.

Each interceptor should be able to neutralise more than one threat during a swarm attack by smaller drones. It should then be able to return to its launch point for inspection, recharging and re-use.

For larger air vehicles – potentially weighing 100kg and with an explosive payload of up to 50kg, the interceptor would be used as an “attritable” asset.

The company predicts a 98%-plus success rate during engagements, and in excess of 90% at maximum range.

“We can fly faster and further than similar systems that are on the market,” says Stephen Scott, the company’s head of research and development for defence.

Scott notes that the system’s use of artificial intelligence and machine learning, and its automatic launch procedure, will enable additional market opportunities.

“We are opening up counter-drone technology to a whole new set of users – we are democratising access to capabilities that may have traditionally been reserved for military customers with very high levels of training,” he says. “We are offering a full capability, right through from detection to defeat. There is no warhead, no liquid fuel, so it is entirely safe.

“We are trying to tackle the cost per engagement metric,” he adds. The company is aiming to offer its interceptor for around one-fifth the cost of a surface-to-air missile’s $150,000 to $200,000 price tag per round.

The company is mid-way through a nine-month development process with the interceptor, and expects initial operating capability to be achieved in the first quarter of 2023. With the design being the result of a request from Saudi Arabia, MARSS is hoping for domestic success.

“This is technology originated and produced in the kingdom,” Pinl notes. MARSS has been present in Saudi Arabia for 12 years, delivering services such as infrastructure protection with its NiDAR technology.

Pinl notes that hostile drone attacks mounted on Saudi Arabia from Yemen and Iraq have become more sophisticated over the last one to two years, with air vehicles capable of operating autonomously and without relying on GPS for navigation, neutralising jamming techniques.

“The threat is constantly evolving – we can’t wait,” he notes.