A new aircraft carrier-capable variant of the Shenyang FC-31 in flight has appeared on Chinese social media, following weeks of speculation about a maiden sortie.

The images, originally posted on social media site Weibo, show the aircraft in green primer. It sports what appears to be a launch bar on the front of its landing gear, allowing for catapult launches. 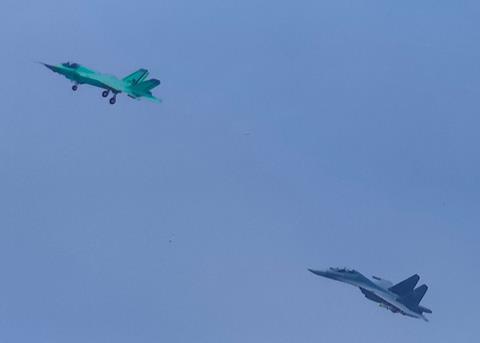 The new FC-31 features a launch bar, and appears to have an F-35-style EOTS sensor under its chin

Other changes over previous versions of the J-31/FC-31 include the addition of what appears to be an electro-optical targeting system (EOTS) under the aircraft’s chin, as well as an air data boom that is consistent with a prototype.

The images show the fighter with landing gear extended, accompanied by a Shenyang J-16.

The cockpit has also been changed, with the bubble canopy of the previous FC-31 replaced with one that is flush with the fuselage. The forward section of the aircraft broadly resembles that of the Lockheed Martin F-35.

It is not clear what the new type is designated. On-line commentary suggests J-XY or even J-35.

The aircraft’s power plant is also not clear. The original J-31 was powered by the Klimov RD-93, but it is possible that the new FC-31 variant could be powered by a pair of Guizhou WS-13s.

The images, if accurate, mark the second major development on China’s fighter scene within a week. On 27 October, images and video emerged of a two-seat Chengdu J-20, making China the first country in the world to develop a two-seat stealth fighter.

I must admit; I‘m again speechless! 😯 Within just a few days not only the J-20B as the first twin-seater stealth fighter but finally also the J-35 (?) was unveiled.

So, say HELLO👋again, this time to China‘s next generation carrier-borne fighter … and this is not faked! pic.twitter.com/hblz94r2bB

That the FC-31 is being developed for use aboard China’s new CATOBAR (catapult assisted take-off but arrested recovery) carrier has been a source of speculation for several years. A mock-up of the FC-31 is even featured on the “deck” of China’s aircraft carrier lab in Wuhan – an office building with a roof resembling the deck of an aircraft carrier.

Meanwhile, work continues on China’s new Type 003 aircraft carrier near Shanghai. Recent satellite imagery suggests the deck has been sealed up, and work is underway on the carrier’s catapults. The vessel has slots for three catapults, and is expected to use an electromagnetic aircraft launch system, as opposed to the steam catapults used on other CATOBAR vessels.

Catapults offer broader capabilities to the People’s Liberation Army Navy than its existing pair of carriers, the CNS Liaoning and CNS Shandong, which launch aircraft with a ski-jump ramp.

In addition to allowing fighters to launch with greater payloads, catapults will also allow the launch of key support assets, namely the Xian KJ-600 airborne early warning and control aircraft, which is also in development.