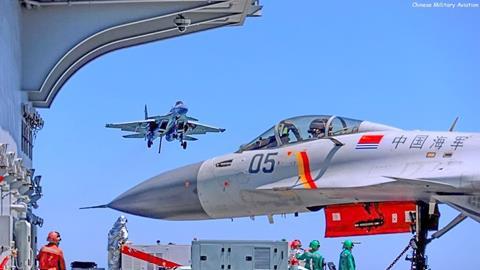 Work on Beijing’s new Type 003 aircraft carrier is proceeding apace, but the composition of its air wing appears to be a work in progress.

During 2020 a massive naval vessel started coming together in Jiangnan Shipyard near Shanghai. Large pre-fabricated sections, impossible to hide from satellites, had already been spotted, prompting considerable interest among naval commentators. The long-heralded vessel, set to be the largest warship China has ever operated, is among the world’s most intriguing naval developments. 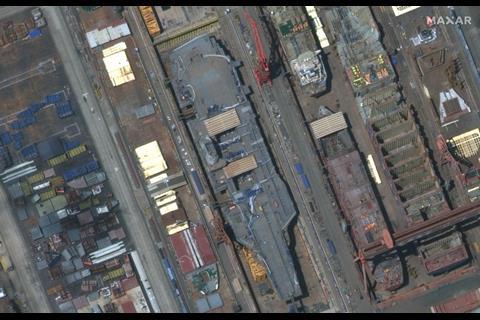 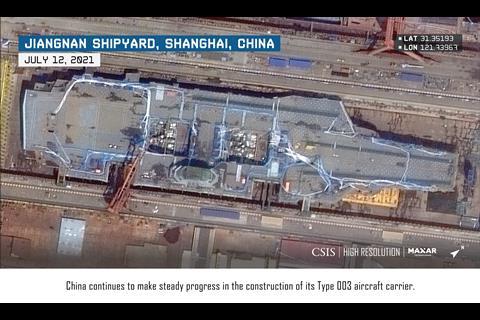 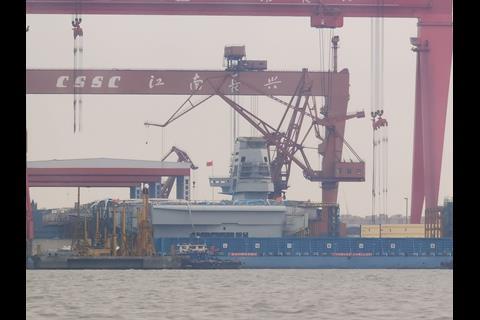 The island of Type 003 has been installed in Jiangnan 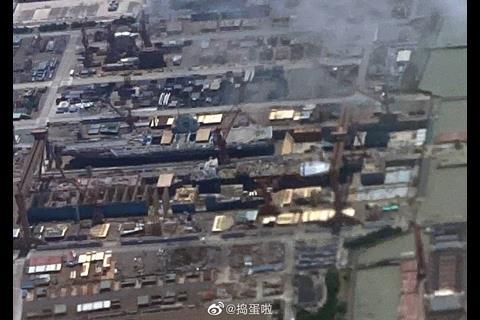 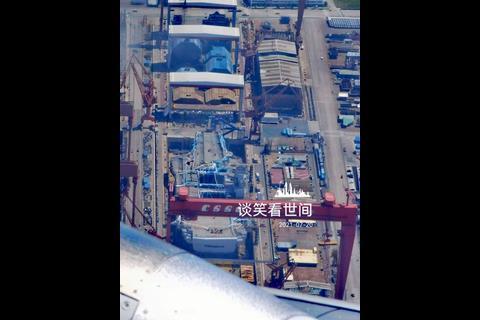 Recent satellite images show the vessel – yet unnamed – approaching its final shape. A 12 July image from Maxar Technologies published by the Center for Strategic & International Studies (CSIS) shows that the flight deck is largely in place, although the ship’s two aircraft elevators have yet to be installed. The carrier’s island is also in position.

The vessel has slots for three catapults, and is expected to use an electromagnetic aircraft launch system (EMALS), as opposed to the steam catapults used on other catapult assisted take-off barrier arrested recovery (CATOBAR) carriers. The only aircraft carrier with EMALS is the latest US Navy (USN) example, the USS Gerald R Ford.

Although the USN vessel’s EMALS system has suffered teething problems, the technology promises to be a major upgrade over the steam catapults used on previous carriers.

“While EMALS has had some issues, as do all new technologies, it has clear advantages and is the future direction of CATOBAR systems,” says Matthew Funaiole, of the CSIS’s China Power Project. “Electromagnetic catapults require less manpower to operate and maintain, they put less stress on airframes and lower the requirements for fresh water.”

Analysts speculate that the vessel could launch in late 2021 or sometime in 2022. Estimates put the size of its future air wing at up to 60 aircraft. The CSIS estimates its length at 315m (1,030ft), and maximum width at 74m. It says the Type 003 is similar in size to the Kitty Hawk class formerly operated by the USN. 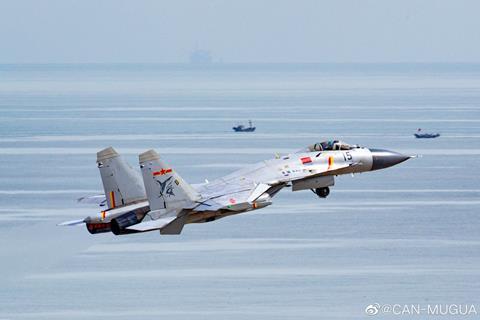 The J-15 is based on the Sukhoi Su-33, but features a number of Chinese improvements

The Type 003 will mark a major shift for the People’s Liberation Army Navy (PLAN). While the PLAN already has two operational carriers, the CNS Liaoning and CNS Shandong, these use ramps to launch aircraft, limiting payloads and precluding the use of fixed-wing airborne early warning and control (AEW&C) aircraft. The use of catapults allows US carriers and the French navy’s Charles de Gaulle to operate the Northrop Grumman E-2 Hawkeye in the AEW&C mission.

“China is still new to carrier operations, and the Type 003 will be its first modern carrier,” says Funaiole.

“Once constructed, the Type 003 will be an impressive achievement for the PLAN, but the Chinese navy will still need time to fully train pilots, develop its air wing, and integrate the vessel into its fleet. That said, the Type 003 will provide Chinese naval leaders with a new flagship as they develop their blue-water navy and look to project power into the Indian and Pacific Oceans.”

The PLAN now operates the Shenyang J-15 from the Liaoning and Shandong. While based on the Sukhoi Su-33, the J-15 is understood to have the glass cockpit found in the J-11 and several other avionics improvements. According to Chinese internet sources, Beijing is working on an advanced version designated J-15T, which boasts modifications to its nose landing gear to allow EMALS launches, as well as a new active electronically scanned array (AESA) radar.

Perhaps the most intriguing J-15 variant is the developmental J-15D, a two-seater that sports electronic warfare pods on its wingtips. In a future Chinese carrier air wing, this aircraft is seen as performing a similar role to the USN’s Boeing EA-18G Growler.

In 2018 the South China Morning Post quoted a Chinese air force lieutenant general as saying that a “new carrier-based fighter to replace the J-15” was in development. This led to speculation about the future of the AVIC FC-31/J-31, a type the Chinese company has been developing for a decade, albeit without a clear commitment from the Chinese military.

A mock-up of an aircraft resembling the FC-31 – which some have christened ‘J-35’ in a nod to the Lockheed Martin F-35, which it resembles – has been sighted on the roof of a Wuhan research facility that simulates the deck of an aircraft carrier.

It is conceivable that Chinese carriers could one day operate a mix of J-15s and FC-31/J-35s, similar to US carriers operating a mix of F/A-18E/F Super Hornets and F-35Cs. As with the F/A-18E/F and Dassault Rafale M, the J-15 features a buddy refuelling capability, allowing Chinese air wings to organically extend the range of strike assets. Buddy refuelling also has an important safety role, as it allows the air wing to top up ‘bolters’: aircraft that have failed to catch an arresting wire when attempting to land, and which are forced to make a fresh attempt. 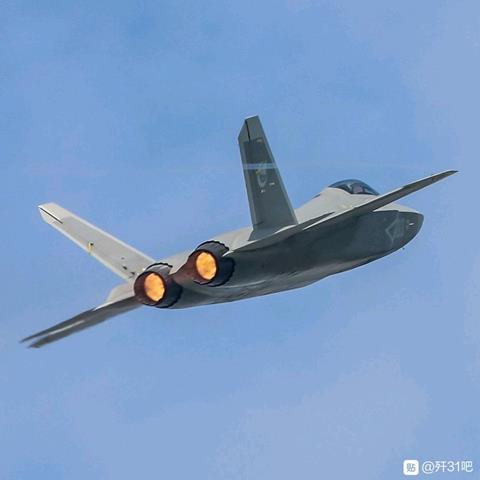 There is some degree of irony in the resources Beijing is deploying both to build the Type 003 and carrier aviation in general. A cornerstone of China’s military planning is keeping US aircraft carriers at bay in the event of a conflict over Taiwan or in the South China Sea. It is understood that China’s DF-21D and DF-26 ballistic missiles are designed specifically to attack warships – namely US carriers – at extended ranges, leading to questions about the survivability of large flattops in future conflicts.

Collin Koh is a research fellow at the R Rajaratnam School of International Studies (RSIS), and an expert on Asia-Pacific naval affairs. He notes that Chinese naval forces can rely on land-based airpower inside the ‘First Island Chain’, which runs from the Japanese archipelago in the north, down through Taiwan and the Philippines, to the tip of the Malay Peninsula. Beyond this, however, improved naval airpower is crucial.

“If the PLA navy is expected to operate east of the First Island Chain, around the Philippine Sea – which is one of the most likely naval campaign areas under a counter-intervention scenario – it needs greater carrier-borne aviation capability and must generate better airpower without necessarily having to rely on land-based support,” he says.

“The further eastward the PLA navy has to project force beyond the First Island Chain, land-based air support in particular will decline exponentially.”

Operating at such a distance from friendly bases will place a premium on fixed-wing AEW&C. Another mock-up spotted atop the Wuhan facility is of an AEW&C aircraft. Beijing is known to be developing a carrier-capable AEW&C asset in the form of the Xian KJ-600, of which images have appeared in Chinese social media, including apparent first flight footage in September 2020. 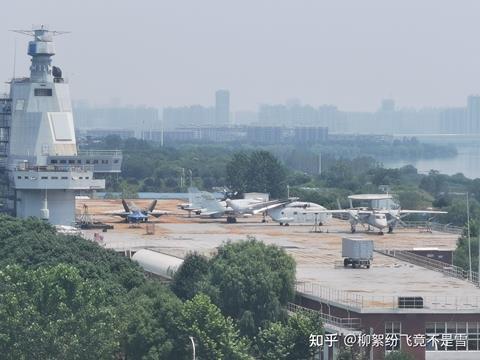 China’s aircraft carrier lab in Wuhan, complete with mock-ups of the FC-31 and KJ-600

The aircraft is virtually identical to Northrop’s E-2, with twin-turboprop engines and a large radar dish above the fuselage. At the 2018 Airshow China in Zhuhai, CETC had an exhibit about its KLC-7 AESA radar in use aboard an aircraft resembling the KJ-600. A promotional video showed it directing red forces in an engagement against a group of blue force enemy fighters resembling F/A-18s.

For the time being, the Changhe Z-18J helicopter performs the AEW&C mission for the Liaoning and Shandong using a retractable radar array.

There is also speculation that the KJ-600 will have a carrier on-board delivery (COD) version, similar to the Hawkeye’s COD variant, the C-2 Greyhound, and possibly a dedicated anti-submarine warfare (ASW) variant. Any carrier-borne fixed-wing ASW asset would be unique to China, following the retirement of the USN’s Lockheed S-3 Viking in 2016.

It is more likely, however, that the PLAN will rely on helicopters to support the Type 003’s ASW mission. The PLAN’s primary carrier-borne ASW helicopter appears to be the Z-18F. Beijing is also developing naval helicopters based on the Harbin Z-20, which resembles the Sikorsky S-70 family. As with the ASW-roled MH-60R and MH-60S multi-mission helicopter, the Z-20F is optimised for ASW work, including carrying a dipping sonar and torpedoes, while the Z-20S would perform utility work. 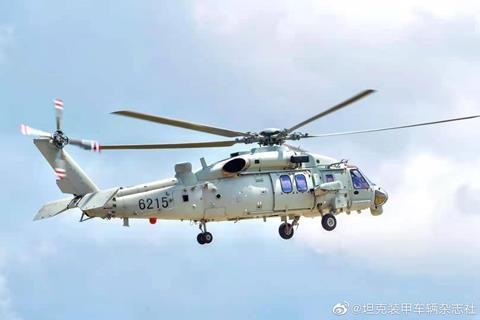 A prototype of the new Z-20S utility helicopter

By any standard, the Type 003 is an impressive warship and a symbol of Chinese power. Still, she will have one catapult fewer than her US counterparts, which feature four.

“A number of factors likely influenced the decision to install three catapults, including deck utilisation and energy consumption,” says Funaiole. “It’s hard to know exactly how this will impact operations once the carrier has entered service, especially since this is China’s first flattop and they are still developing its air wing – which will likely be smaller than the air wing of US carriers.”

Koh notes that the PLAN is likely to supplement the striking power of the carrier with long-range cruise missiles deployed on other ships in the battle group.

While the Type 003 may not be a direct peer to US super carriers in terms of its size or air wing, its development helps define the trajectory of Chinese naval airpower in the coming decades. Much work lies ahead, both in the development of aircraft and, more crucially, the training of personnel and the establishment of operational procedures.

Moreover, the Type 003 will set the PLAN apart among Asia-Pacific navies. Though India has a long tradition of carrier operations, and Japan is converting two ‘helicopter destroyer’ flattops to operate the F-35B, neither is developing anything remotely on the scale of the Type 003 – though New Delhi hopes, one day, to develop a CATOBAR vessel.

Perhaps more importantly, the Type 003’s eventual air wing will be superior in quality and quantity to most Southeast Asian air forces. During any dispute in the contested South China Sea, the deployment of a super carrier would send a powerful message. Beijing, like Washington DC, realises that the true value of aircraft carriers may not be fighting major wars, but enforcing its will in times of peace.