A report from the USA’s Defense Intelligence Agency (DIA) depicts the capabilities of the North Korean air force as marginal, with limited ability to project power beyond the isolated country’s borders.

The North Korea Military Report mainly focuses on Pyongyang’s efforts to develop ballistic missiles and nuclear warheads, which the regime of Kim Jong-un sees as offering an asymmetrical capability against the superior conventional forces of South Korea, Japan and the USA. 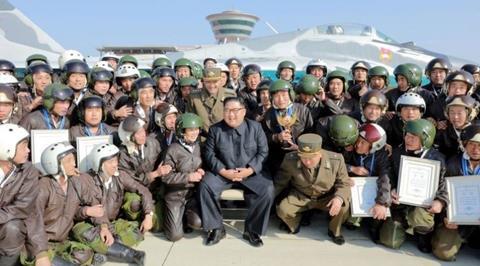 North Korean dictator Kim Jong-un with fighter pilots in 2019. The US Defense Intelligence Agency says the MiG-29 (pictured) is Pyongyang’s most capable type

“Pyongyang probably assesses its force as a whole cannot prevail in combat against the United States, given US forces’ overwhelming advantages in power projection, strategic air superiority, and precision-guided standoff strike capability,” says the DIA.

In all, the DIA gives the North Korean air force’s fleet size as over 900 combat aircraft, along with 300 transports and 300 helicopters.

The DIA notes that the most modern assets in the North Korean air force inventory are RAC MiG-29s and Mikoyan MiG-23s, which the agency contends would have “considerable difficulty” against South Korean air defences.

Other types in the North Korean inventory that the DIA deems of some capability are its Sukhoi Su-25 ground-attack aircraft and its Ilyushin Il-28 bombers. It notes that North Korea also retains obsolete types such as the MiG-15, MiG-17, MiG-19 and MiG-21.

Citing reports, the DIA notes that North Korean pilots may get about 15-20h flying annually, with fuel shortfalls a significant handicap. Another challenge is the upkeep of ageing aircraft. The DIA notes that the North Korean aerospace sector is only capable of building light, single-engined aircraft, and relies on cannibalisation and buying spare parts overseas for its aging fleet.

In a conflict, Pyongyang’s large fleet of Antonov An-2 biplane transports would probably be tasked with inserting special forces into South Korea.

“North Korea has demonstrated a capacity to field multiple classes of UAVs and fly them into South Korean airspace undetected, although several of these UAVs have malfunctioned and crashed. The North probably sees future intelligence gathering roles for its UAVs and may look into arming UAVs to supplement the air force’s ground-attack capabilities.”

The DIA adds that given that the air force and navy are not a focus for the country’s leadership, while the service’s can execute core missions, their readiness and capability will suffer over time.