Northrop Grumman has completed the second test flight of a developmental missile that is aimed at the US government’s requirement for a new Stand-in Attack Weapon (SiAW).

The work involved a missile demonstrator mounted on the nose of a company-owned Bombardier CRJ-700, says Northrop. 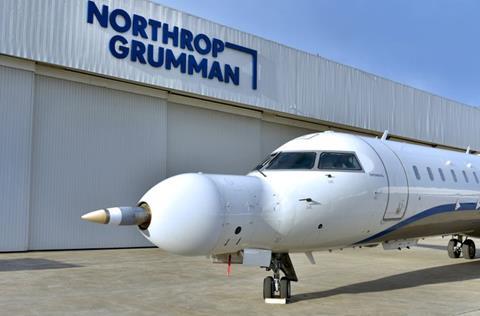 The aircraft served as a test-bed for the new weapon’s surface mission computer and sensors.

“This second flight test demonstrated the mission capability of the missile sensor systems combined with the mission computer,” says Northrop.

The company plans additional flights to test the weapon in “more stressing scenarios”.

SiAW is aimed at defeating targets under the anti-access/area denial (A2/AD) umbrellas of potential US rivals, such as China.

The requirement first emerged in early 2020, with the US Air Force requesting information for modifications to the US Navy’s Advanced Anti-Radiation Guided Missile-Extended Range (AARGM-ER), that would make the weapon suitable for the Lockheed Martin F-35A. The AARGM-ER is also a Northrop product.

“We have taken significant steps to mature our missile design, providing capabilities for the US Air Force SiAW programme and other programmes,” says Dan Olson, Northrop’s vice-president and general manager, weapon systems.

“Leveraging our digital engineering expertise to accelerate timelines, our first complete missile is planned to be built and ready for launch in 2022.”

Northrop, which refers to the weapon as its ‘A2/AD missile’, says the weapon builds on the navy’s AARGM-ER, and will be capable of integration with “a variety of aircraft”.

Though Northrop does not state it, the new weapon could also find employment on the developmental B-21 stealth bomber.

In November, the US Mitchell Institute issued a paper stating that the US Air Force needs a new generation of precision-guided munitions to effectively deter and fight major powers such as China and Russia.