The US Government Accountability Office (GAO) believes that plans to fix issues with the Boeing KC-46 tanker could result in additional risks for the long-troubled programme.

The GAO takes issue with a plan by the US Air Force (USAF) and Boeing to fully replace the 767-derivative’s remote vision system (RVS). 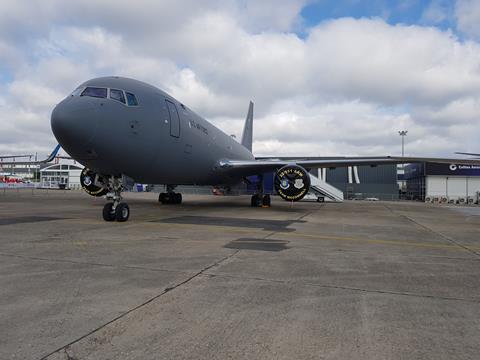 The aircraft’s existing RVS performs poorly in certain light conditions, limiting the tanker’s utility. For the time being, the aircraft is restricted to training missions, and is not cleared for combat missions.

The GAO believes that the technology involved in the planned RVS re-work is insufficiently mature, creating the potential for risk and delays. It notes that the plan does not involve integrating the new RVS with a prototype prior to completing the design, which could see more issues uncovered in future.

The USAF and Boeing anticipate a fix for the RVS by 2024.

The GAO recommends that the KC-46 programme office make an independent technology risk assessment of the redesigned RVS, develop a technology maturation plan, and test the new RVS on a KC-46 in an operational setting. These three items, it feels, should be completed before the preliminary design review is closed.

“[USAF’s] choices mirror those made during the development of the KC-46 that led to the delivery of an aircraft that did not fully meet its requirements, and the air force stands poised to potentially repeat its past mistake,” it says.

“Without taking these steps, either before or after the preliminary design review, the programme risks additional design changes that could result in cost growth and further schedule slips for the programme. The earlier the programme takes these steps to understand any technical risks, the better prepared the programme will be to address those risks.”

It also notes that the original contract limited the US government’s financial risk, owing to the fixed-price contract with Boeing. The proposed RVS fix, however, sees the USAF assuming risk for costs associated with RVS technology it does not feel is sufficiently mature.

The US Department of Defense, for its part, disagreed with the GAO’s suggestions in a letter responding to the draft of the report. It believes that its approach effectively manages risk, and will allow the new RVS to enter service more quickly. 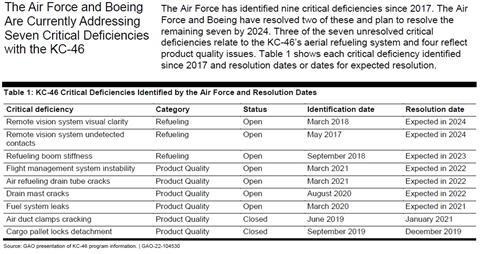 In addition to the RVS issue, the KC-46’s boom is too stiff to refuel lighter-weight aircraft, such as the Fairchild-Republic A-10 and Lockheed Martin F-16.

This requires the boom to be re-designed, with a fix expected by 2023.

Overall, the GAO notes that the USAF has identified nine critical deficiencies with the KC-46 since 2017, of which two have been resolved, with plans to resolve the remaining seven by 2024.

The GAO underlines the urgency of developing the KC-46 fleet, noting that the USAF’s fleet of Boeing KC-135s and KC-10s are increasingly difficult to maintain owing to obsolescence issues. The report also explores the possibility of the USAF contracting out tanker services, similar to US Navy practice.