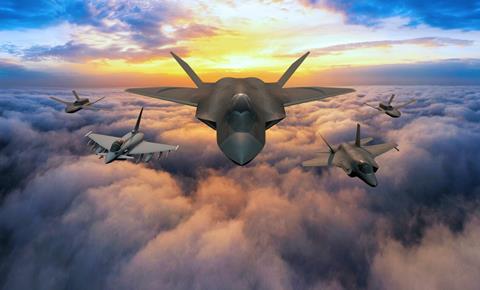 The Aurora EDP team’s involvement will also include supporting work on uncrewed systems and digital engineering capability development, Qinetiq says. “Together, these will enable DE&S to deliver the necessary engineering outputs required by the MoD to support the development of future FCAS capabilities as they are acquired and brought into service,” the company adds.

The current deal – which builds on an earlier two-year arrangement – covers support activities until August 2025, but Qinetiq notes: “As the Catalyst programme grows, EDP provides a strong platform to support emerging requirements for years to come.”

“This contract with Aurora and Qinetiq is a demonstration of our commitment to working with the UK’s leading defence technology companies on FCAS,” says Richard Berthon, the MoD’s director future combat air. “Their expertise will be vital to the programme as we work at pace to deliver a next-generation combat air capability by 2035.”

The UK-led FCAS effort – which also involves Italy and Japan, plus Sweden as an observer – will deliver a suite of future systems, including a manned Tempest fighter, due to be in operational use by 2035.

BAE Systems in July 2022 announced plans to fly a demonstrator for the sixth-generation manned fighter by mid-2027, with the asset now in manufacturing.