The three aircraft are part of the RAAF’s 77 Sqn, and transited to Australia from Eglin AFB, Florida, says Australia’s Department of Defence (DoD). 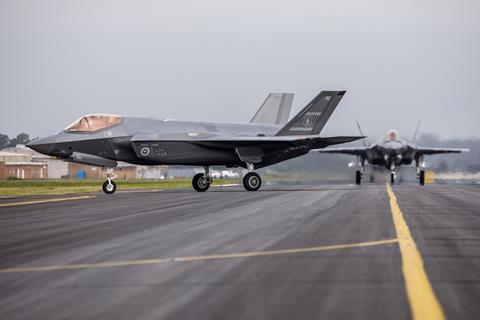 The RAAF’s newest F-35A Lightning II aircraft taxis to the lines at RAAF Base Williamtown, in New South Wales

The ferry flight operation was dubbed Lightning Ferry 21-4, says the DoD. It involved a transit via the Pacific through Hickham AFB, Hawaii, to RAAF Williamtown, New South Wales, where the fighters will be based.

The activity marks the last RAAF F-35 delivery exercise for 2021. Overall, the RAAF is slated to receive 72 F-35As.

“The additional aircraft will help us generate a ready force able to integrate into a high-end all domain fight.”

Prior to ferrying to Australia, the fighters were involved in Exercise Lightning Spear 21 at Eglin AFB, from 1-5 November. This operational test work focused on weapons integration.

“The consecutive activities of Lightning Spear and Lightning Ferry demonstrates 77 Squadron’s agility and maturity at operating with our latest F-35A capability,” he says.

Separately, the RAAF recently demonstrated the readiness of its Leonardo C-27J Spartan fleet with the simultaneous launch of seven aircraft from RAAF Amberley, Queensland. 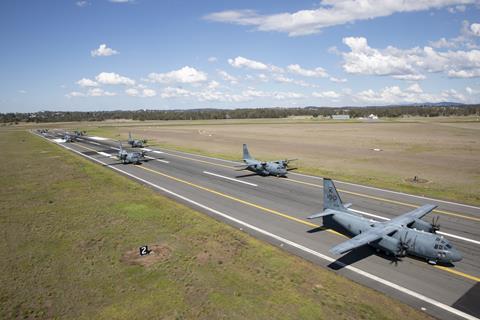 The RAAF claims it was the biggest simultaneous launch of C-27Js ever conducted, and that the operation highlighted the type’s readiness.

Canberra operates 10 C-27Js. In July, the DoD changed the mission set of the C-27J fleet to disaster relief and humanitarian work.