Royal Australian Air Force (RAAF) General Carl Newman has joined the US Air Force as a deputy commander of its Pacific command.

Air Vice-Marshal Newman, who has served in the RAAF for 35 years, will report to commander General Ken Wilsbach, Pacific Air Forces (PACAF) said on 12 January. 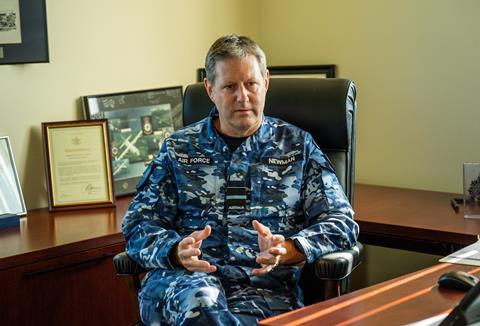 “General Wilsbach has given me three focus areas for my tenure here,” says Newman.

“One is to enhance PACAF sustainment within the theatre, ensuring readiness to provide effective responses to security or humanitarian events and execution of PACAF’s operational plans. Second, I will work closely with Allies and partners to enhance our combined air domain awareness. Lastly, I’ll help to shape effective command and control of Combined Task Force structures that optimise the airpower contributions that PACAF and our joint and coalition partners bring to any fight.”

In the role, Newman will work alongside a USAF counterpart, Lieutenant General James Jacobsen, to help manage and command a force comprising nearly 46,000 personnel.

Newman adds that he has had many interactions with the USAF over the years, dating from his first assignment as a navigator aboard an RAAF Lockheed Martin C-130 tactical transport.

“We [Australia and the United States] are incredibly similar in the way we approach the application of airpower,” says Newman.

“Our interoperability and close integration come from the deep relationships we’ve had all the way back to World War II.”