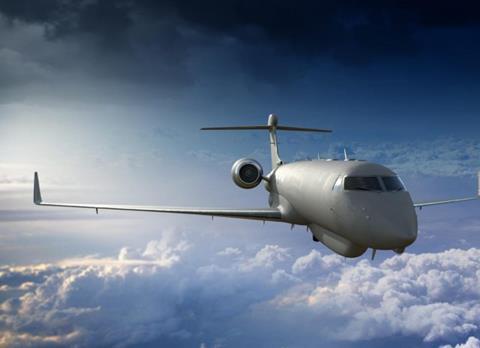 “At this stage of the project, all four aircraft are in varying stages of the modification cycle. Initial flight test activities have commenced, with a comprehensive flight test programme scheduled to be completed in mid-2023,” says the DoD.

“This will ensure the modified G550 aircraft meets the airworthiness requirements for the MC‑55A Peregrine capability.”

The Royal Australian Air Force (RAAF) expects to take delivery of the first example during the last quarter of 2023, with initial operational capability (IOC) to follow in 2024. IOC is contingent on the aircraft successfully completing ground tests, flight tests, and training activities.

An image of the highly modified aircraft with the registration N540GA recently appeared on social media. Flightradar24 shows that the aircraft’s most recent flight occurred on 27 May, with the aircraft flying from Savanah, Georgia where Gulfstream is based, to Greenville, Texas where L3Harris is undertaking modification work.

“A key enabler for the fifth-generation force, the MC-55A will be a highly capable, full spectrum Intelligence, Surveillance, Reconnaissance and Electronic Warfare (ISREW) aircraft and will support a range of flexible mission roles for Defence. The capability will substantially enhance electronic warfare support to naval, air and land forces for operations in electromagnetic environments. This includes, but is not limited to, enhancing F-35, Growler and E-7 capabilities.”