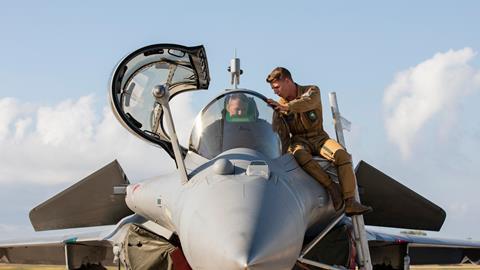 “France is a reliable and trustworthy military power, able to deploy whenever it is required,” says French air force Major General Stephane Groen, chief of staff for Air Defence and Operations Command.

“And France is a nation of the Pacific through New Caledonia – we are very much engaged in the security of the region.”

Groen was speaking on the back of a month-long deployment of French air force assets to the Asia-Pacific as Mission Pegase 2022.

Designed to demonstrate Paris’s expeditionary air power capability and bolster interoperability with key air forces in the region, the deployment comprised a trio of Dassault Aviation Rafale B two-seat fighters, alongside an Airbus Defence & Space A400M, and a pair of A330 multi-role tanker transport (MRTT) aircraft. 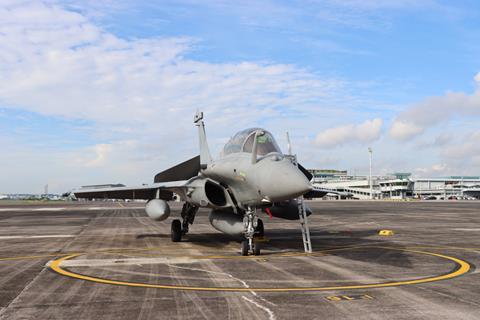 Departing on 10 August, and including stops in India and Darwin, Australia, the contingent arrived around 72h later in France’s far-flung Pacific territory of New Caledonia.

There, the Rafales, in satellite communication with Paris, simulated the launch of MBDA SCALP-EG cruise missiles against a land target in support of a mock amphibious assault by French forces.

Following this, the force returned to Darwin, where it participated in the Pitch Black 2022 event, where an international force of 100 aircraft gathered for a major air combat exercise.

Groen, speaking with FlightGlobal in Singapore on 15 September, said it is important for France to demonstrate its expeditionary capability.

“We are more global than we used to be and more active,” he says. “Participating in Pitch Black allowed us to train with regional air forces that we’re not used to training with. All the pilots and the air crew made a lot of progress with the exercise. They were very much plug and play.”

A particularly important element was to improve interoperability between the Rafale and the Lockheed Martin F-35, which were represented at the exercise by A-model jets from the Royal Australian Air Force (RAAF) and US Marine Corps F-35Bs. 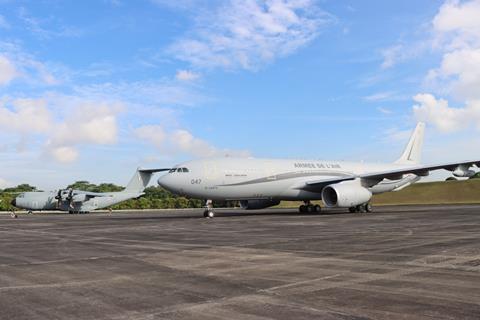 The exercise saw the Rafales work alongside the F-35s in what Groën describes as “large force employment”.

“The F-35 is a very capable aircraft, as is the Rafale,” he says. “I would say that in the long run, the [Rafale and F-35] are the same capability. When it comes to basic fighter manoeuvres, we were flying with three big [fuel] tanks. But if we remove the big tanks, I would say they are very much alike in basic manoeuvres.”

He adds that an RAAF F-35 pilot who flew a mission in the back seat of a French Rafale was impressed. “He was not expecting the Rafale to be as advanced at it is… he was very impressed by the kit we have inside.”

Following Pitch Black, the Pegase 2022 detachment stopped in Indonesia and Singapore. Operating  from Jakarta’s Halim air base, Indonesian crews had the opportunity to fly in both the A400M and the Rafale – for which Jakarta has orders for two and 48 aircraft, respectively.

“We showed them what they have purchased, and what they can learn from us while they wait for their new aircraft to arrive,” says Groen.

During a short stopover in Singapore, a pair of Rafales ‘fought’ a pair of Republic of Singapore Air Force (RSAF) Boeing F-15SGs during a simulated engagement in international airspace over the South China Sea.

In addition to a new logistics arrangement signed between Paris and Singapore this year, France has close ties with the city state. Singapore bases its advanced jet trainer fleet of Leonardo M-346s in Cazaux, France and the RSAF also operates the A330 MRTT. Additioanlly, it is in the process of replacing its Airbus Helicopters AS332 Super Pumas with H225Ms. The Singaporean navy’s six Formidable-class frigates are a variant of France’s Lafayette-class ships, and were constructed in France.

Following the visit to Singapore, the Pegase force departed for the UAE, which in April confirmed an order for 80 Rafales.

But this will not be France’s last visit to the region: Groen says the air force is already planning its return. He points out that modern support aircraft such as the A400M and A330 MRTT greatly ease the logistics burden involved in long-range deployments. During Pegase 2022, the force used Darwin as a logistics base, with the A400M tasked with flying spare parts to forward-deployed units.

France aims to conduct one Asia-Pacific deployment annually, potentially with larger numbers of aircraft, “to come quicker, and to go faster”, says Groen. Given that the latest mission was to the southern part of the Asia-Pacific, the next one is likely to be in North Asia. 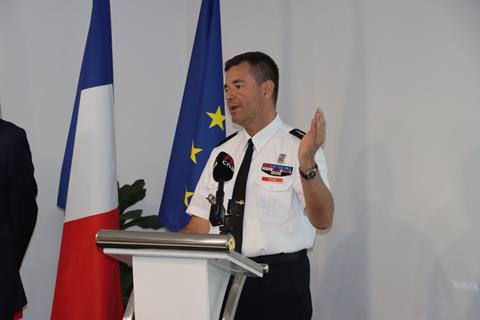 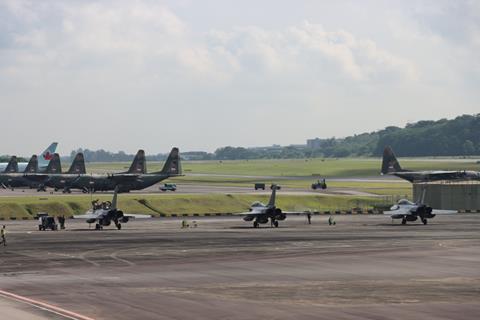 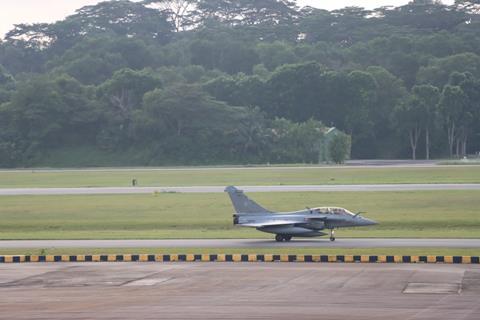 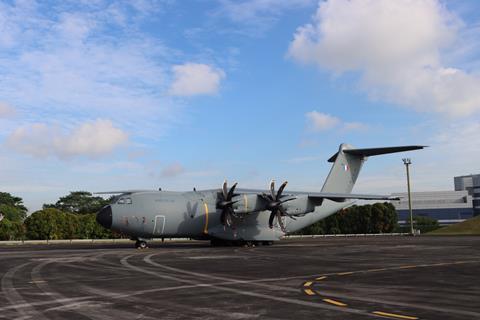 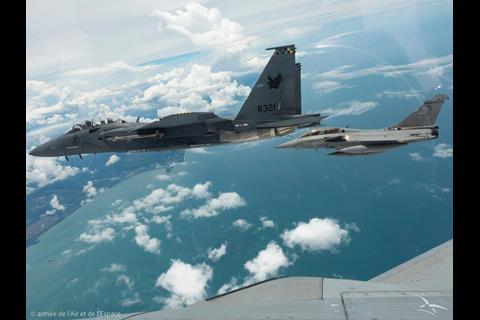 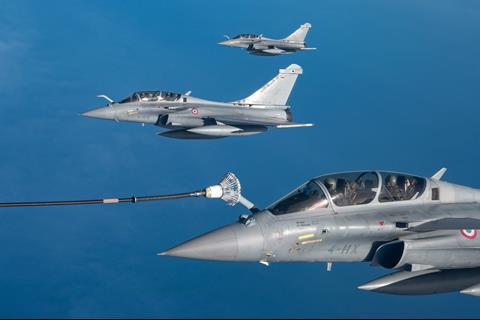 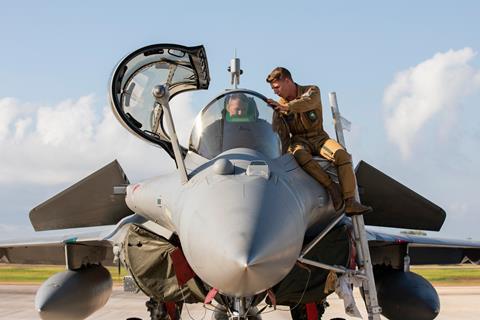 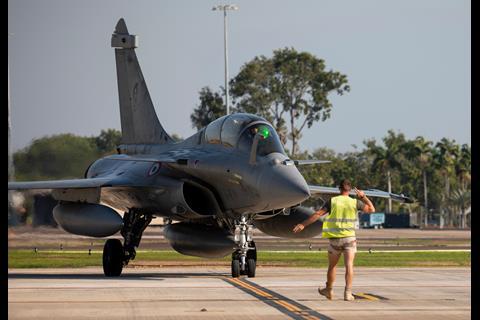 A French Air Force Dassault Rafale taxis on the flight line after arriving at RAAF Base Darwin for Exercise Pitch Black 2022.

Currently operating in the F3-R standard, the following F4 standard is in development, which will bring major improvements to the Rafale’s electronic warfare, radar, and weapons capabilities, says Groen.

Subsequently, F5-standard aircraft are expected to arrive in 2035. But the enhancements proposed will not be for the Rafale alone, he says, also aiding work on the tri-national Future Combat Air System (FCAS): “F5 is the first brick of FCAS. That has to be mentioned, because when we speak about FCAS, [people] always think of the New Generation Fighter, which is a system of systems. But the first brick of FCAS is Rafale F5.”

Currently, the French air force has 102 Rafale B/Cs, rising to 129 by 2025. In the near term the inventory is likely to decline as aircraft are diverted to export customers Croatia and Greece, which are both taking a dozen secondhand examples.

Groen, however, notes that the departure of older Rafales makes way for new airframes.

“You can argue that a Mirage is not a Rafale, but it’s still a fighter aircraft. It gives us capabilities, especially for operations in Africa,” he says.