A US Air Force-sponsored analysis of Russian air strikes in Syria presents a mixed review of Moscow’s air power capabilities.

The 95-page report, by think tank Rand, focuses purely on Russia’s intervention in the Syrian civil war from 2015 until 2018. It was completed in September 2019, but only released on 11 May. 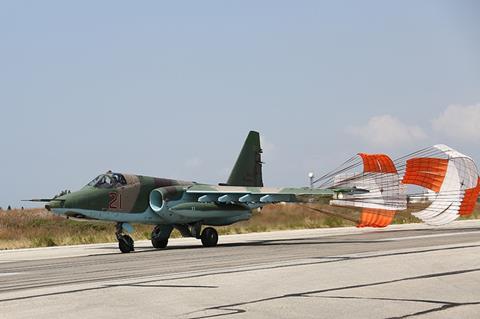 Drawing from a range of sources, including social media and satellite images, Rand identifies five distinct phases of Russia’s air strike campaign. The first, running from September 2015 to early 2016, was the most intense, with the number of daily air strikes ranging from 15 up to 35. During this phase Moscow was focused on supporting the regime of its ally, Syrian dictator Bashar al-Assad.

Moscow deployed a broad range of combat types to Syria, including the full Sukhoi family of combat jets and even the developmental Su-57. Also deployed were RAC MiG-29s and a range of helicopters.

“Russian airpower played a decisive role in Syria,” says Rand. “The Russian intervention ensured the survival of Syrian president Bashar al-Assad’s regime, defeated his opposition, contributed to the rollback of ISIS, and secured Russia’s position in the region.”

While it was effective overall, Rand notes that Russia was highly reliant on local bases, which might not necessarily be available in future conflicts. Moreover, the Russian air force did not face an adversary with advanced air-to-air or surface-to-air capabilities.

Russian air strikes also tended not to use precision-guided munitions (PGMs). Rand cites one estimate that suggests up to 95% of munitions dropped were unguided.

The campaign also served to underline Russia’s lack of tanking capabilities, and its reluctance to use fixed-wing aircraft for close air support owing to “several instances of fratricide”.

Rand indicates that Russia was not greatly concerned with careful target selection. Early in the intervention, the majority of targets hit were large, stationary or “bombed indiscriminately” with unguided munitions.

Though the report was written well in advance of Russia’s late February invasion of Ukraine, it is prophetic of Russia’s lackluster combat performance against a capable adversary.