The UK’s largest warship – HMS Prince of Wales – has made a faltering start to a deployment that will involve the 65,000t vessel operating Lockheed Martin F-35Bs off the US east coast later this year.

One of the Royal Navy’s (RN’s) two Queen Elizabeth-class aircraft carriers, the ship left its home base of Portsmouth, Hampshire on 27 August, for a three-month Westlant 22 commitment which will also include visits to Halifax, Nova Scotia in Canada, New York, and the Caribbean. 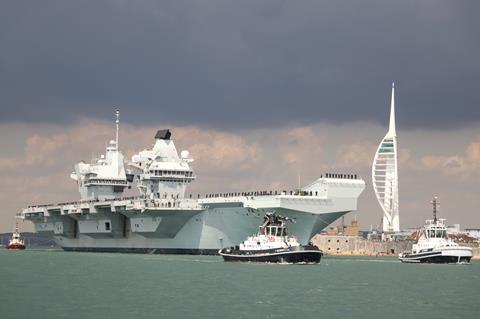 The RN describes Westlant 22 as “a landmark mission to shape the future of stealth jet and drone operations”, with the activity also to involve the expanded use of Qinetiq Banshee Jet 80+ unmanned aerial targets. This work will “push the boundaries of uncrewed technology and the tactics used by the new Queen Elizabeth-class carriers”, the service adds.

However, a mechanical fault affecting the ship’s starboard shaft halted progress shortly after its departure. Rear Admiral Steve Moorhouse, director force generation at Navy Command, says repairs “may impact the ship’s programme”, but that it is “working closely with industry partners to resolve this as soon as we can”.

The vessel had departed Portsmouth with Leonardo Helicopters AW101 Merlin HM2 rotorcraft and Banshee air vehicles embarked, while “F-35B stealth fighters [will] join the deployment once the ship arrives in North America”, the navy says.

Earlier work aboard Prince of Wales has trialled the use of rail-launched Banshee Jet 80+ targets to emulate threats such as cruise missiles and enemy fast jets, in support of self-defence training.

On 17 July, Qinetiq announced its receipt of a £1.5 million ($1.7 million) contract to “provide its experimentation expertise and Banshee Jet 80+ air vehicles to support the Royal Navy’s future use of high-performance Uncrewed Aerial Systems in Carrier Strike Group operations”. This followed the service’s award earlier this year of a four-year, Vampire Phase 1 deal worth £6 million to support such tasks. 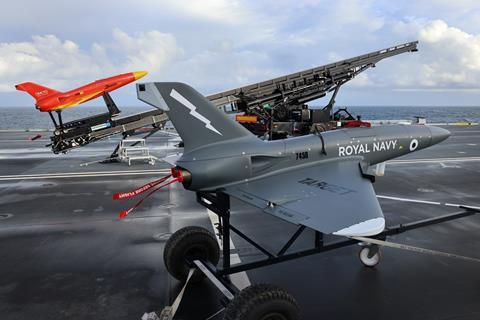 “The experimental trials will test Banshees in training and ISR [intelligence, surveillance and reconnaissance] scenarios,” the UK company says. The latter will employ the vehicles “to deliver rapid visual identification of radar contacts, to allow classification of threats”, it adds.

“With the addition of electronic warfare systems, the Banshee will not only stimulate the ship and aircraft radar systems, but also the threat warning systems, adding more depth and reality to the training that can be delivered,” Qinetiq says. It also will “demonstrate the potential use of Banshee in a decoy role” as part of the work.

“Taking the HMS Prince of Wales task group across the Atlantic for the rest of this year will not only push the boundaries of UK carrier operations, but will reinforce our close working relationship with our closest ally,” says commanding officer Captain Richard Hewitt.

At the same time, the aircraft carrier will remain at high-readiness in her parallel role as NATO’s current command ship. This “sees her head up the naval element of the Alliance’s response force that is capable of being deployed quickly anywhere in the world to react to crises”, the RN notes.

Meanwhile, the service also is preparing for a deployment “this autumn” of its fleet flagship HMS Queen Elizabeth, which will involve the vessel operating in the Mediterranean and Baltic regions.