Russia’s hesitant air force and the upcoming offensive in Ukraine

As the war in Ukraine enters its eighth week, the situation continues to rapidly change. Russia is still struggling to achieve air superiority, despite a massive numerical advantage in the sky.

In the midst of a retreat on the northern front and a build up in the east, the flagship of the Russian navy’s Black Sea fleet, the Moskva, has sunk, either as the result of a Ukrainian missile attack or an on-board accident.

Russia is now changing its strategy, building up forces for what is expected to be a massive offensive along a main front. The outcome of the war remains far from certain, as does an explanation for the Russian air force’s lack of effectiveness in the sky. 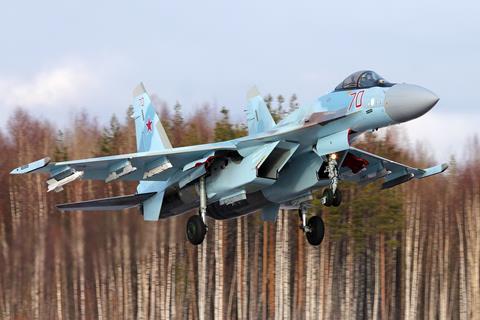 At the start of the conflict, Russia enjoyed a substantial air power advantage. According to FlightGlobal’s 2022 World Air Forces directory, the Russian air force counted 1,435 fixed-wing combat aircraft to just 98 in the Ukrainian air force – an advantage of nearly 15-to-1. The disparity was even greater when measuring combat helicopters.

Despite that advantage, the Russian air force has only been able to conduct limited combat sorties and still does not enjoy true air superiority in Ukraine.

One explanation for that ineffectiveness could be the military aid flowing into Ukraine. Various highly effective anti-aircraft weapons have been provided to the Ukrainian armed forces, ranging from smaller, man-portable anti-aircraft missiles like the US-made Raytheon FIM-92A Stinger and the UK-manufactured Thales Starstreak HVM, to large, truck-mounted S-300 long range surface-to-air missile systems.

Those weapons have been effective at hampering Russian air operations, according to Mark Cancian, a retired US Marine Corps colonel and senior advisor to the Center for Strategic and International Studies’ International Security Program.

Cancian notes the presence of guided anti-air missiles forces Russian pilots to fly at higher altitudes, where they are less effective. However, he says there are likely much deeper, structural issues within the Russian air force that are behind the issues.

“Everyone has been expecting the Russians to unleash their air force at some point,” Cancian says. “That may never happen.”

He says there are a number of possible explanations for the muted air presence, ranging from practical to strategic.

Another possibility is that a lack of precision munitions and a well-documented reliance on unguided “dumb bombs” has left Russian aviators overly vulnerable in contested airspace, forcing them to limit sorties.

Insufficient pilot training and lack of confidence are the most likely culprits, says Dmitry Gorenburg, a senior Russia analyst with CNA, a research and analysis organisation in Virginia.

Gorenburg says when the Russia-Ukraine war began, most observers expected Russia to capitalise on its air advantage by waging a Gulf War-style shock-and-awe campaign, using a protracted aerial bombing effort to pave the way for a ground invasion.

That requires huge numbers of aircraft operating in close coordination, which so far has not happened in Ukraine.

After making that observation, Gorenbrug says some analysts went back to review Russia’s air campaign in Syria. They found a similar operating pattern to what is being observed in Ukraine: sorties involving just one to four Russian aircraft working together.

Gorenburg says that made sense in Syria, which was largely an uncontested environment for Russia. But seeing the same tactics employed in a high-intensity battlefield like Ukraine is puzzling.

“Now the question has arisen whether [the Russians] are just not really either capable or maybe confident enough in complex air operations, the sequencing of strikes and all that kind of thing that you need to do.”

Cancian notes that Ukraine’s modest air force and Russia’s unwillingness to fully deploy its assets has meant that the initial phase of the war has been mostly ground-combat centric. He believes that will continue to be the case going forward.

SINKING OF THE MOSKVA

Russia suffered a massive symbolic defeat on 14 April, when the flagship of its Black Sea fleet sank off the coast of Ukraine. The cause remains disputed – Ukraine claims to have hit the guided missile cruiser with two of its Neptune anti-ship cruise missiles, while Russia claims an on-board fire ignited ammunition stores. 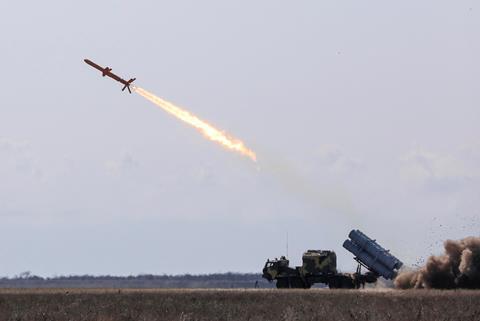 A Ukrainian-made Neptune anti-ship cruise missile. Ukraine claims it hit the Moskva with two of the weapons before the ship caught fire and sank on 14 April

The fate of the more than 500 crew aboard the ship remains unknown. Russia claims some were evacuated while attempting to tow the Moskva to port and a Turkish ship is reported to have rescued at least 50 Russian sailors as their vessel sank.

Although both Gorenburg and Cancian say the loss of the ship, named for Russia’s capital city Moscow, is a massive psychological and symbolic loss, the Moskva’s impact in the air and on the ground was minimal.

Although Russia has made heavy use of ship-launched Kalibr cruise missiles in the conflict, Gorenburg notes that the Moskva did not carry those weapons. Its primary armaments were anti-ship missiles and an S-300 air defence system.

The ship did carry several powerful radars, which Gorenburg says may have assisted in identifying targets for other ships in the Black Sea carrying weapon like the Kalibr.

Cancian notes that the Moskva also had fairly limited capability in an air defence role, with capacity for only for eight anti-air missiles. An equivalent US Navy (USN) vessel can carry more than 90 missiles of various types.

He says the ship’s primary strategic function was to destroy USN aircraft carriers, meaning that it would not have played a major role in the expected offensive in the Donbas region of Eastern Ukraine.

However, both Cancian and Gorenburg say now that Ukraine has revealed the viability of its shore-based Neptune missile system, Russian ships will be forced to operate much farther away from the coastline, where they will be even less effective.

Russia is now transferring the bulk of its forces to the front in eastern Ukraine, with a substantial offensive expected in that region in the coming weeks. Although ground combat will be the overwhelming focus of that campaign, Gorenburg says to keep an eye on the Russian air force.

By all appearances, Russia appears to have switched its strategy from a chaotic, multi-front rush to a more traditional, massed advance along one main axis, similar to what US-led coalitions did in both the 1991 Gulf War and the subsequent 2003 invasion of Iraq.

That type of operation typically involves substantial air sorties and air-based fire support to ground troops. Gorenburg says whether or not the Russian air force is able to provide that kind of support will help provide an answer to its mysterious absence during the opening weeks of the war.

“It will tell us whether what we saw in phase one was due to poor planning or a lack of capability,” he notes. “If it’s poor planning, they can fix that. And we’ll see them much more coordinated in terms of ground and air operations.” 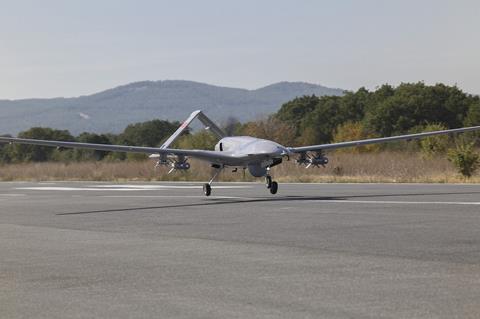 However, if the reason for Russia’s inability to achieve air dominance was a lack of capability, whether due to poor training, lack of maintenance or bad command and control, Gorenburg says that problem likely cannot be fixed in the short term and Russian air power will continue to under-perform.

If the issue is the risk to low-flying aircraft stemming from a shortage of precision-guided munitions, that also is unlikely to be resolved in the near term. Russia relied on dumb bombs even during its much more limited air campaign in Syria. The US Air Force’s stock of ammunition also began to dwindle during the 2015 campaign against the Islamic State in Iraq, with then chief of staff General Mark Welsh saying munitions were being expended “faster than we can replenish them”.

Cancian predicts that Russia will attempt a sudden offensive breakout in the east. He says the fighting will continue to be ground-centric, pitting Russian armour against Ukrainian anti-tank teams, but notes that despite its combat aviation losses, Russia still has ample capacity to mount an air campaign.

But he also points out that thus far, Russia has been “very tentative” with its air operations, relying instead on missile strikes. While ground forces suffer substantial combat losses, Cancian says Russia’s military leadership may be choosing to preserve its air forces as a hedge against potential conflict with NATO.

He thinks that will likely continue to be the case in the expected new phase of the war, while Ukraine will continue to counter with drones and anti-aircraft missiles.