Saab has outlined its efforts to address the increasing threat posed by hostile parties disrupting operations via GPS jamming, with Gripen operators being offered an updated navigation capability for use from later this decade.

“Your own platform position is really important, and over time the requirements for the precision of that positioning has increased more and more – now we are talking metres,” says Gripen experimental test pilot Jonas Jakobsson. 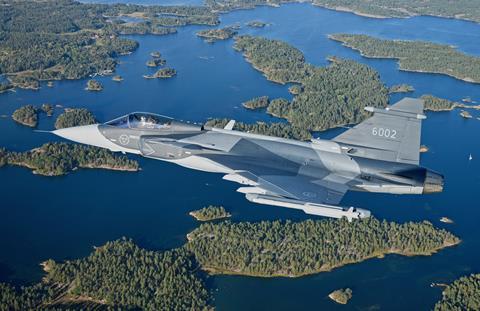 Gripen E could be enhanced for GNSS-denied operations

“For years, the go-to solution has been the global navigation satellite systems [GNSS], and most of the time GPS, to achieve this,” he notes. However, severe GPS jamming has been experienced during major military exercises in Scandinavia, and minor disruption can also be caused by natural events, such as solar flares.

With air forces needing the highest level of navigational and targeting accuracy to ensure that zero collateral damage is caused when precision-guided weapons are deployed, Saab is looking to defeat such anti-access/area denial (A2/AD) tactics.

Jakobsson says that if militaries opt to avoid operating in GNSS-denial-affected areas then “it’s a really cheap A2/AD weapon” for an adversary. And while anti-jamming technologies can help, this may not be the case in highly contested areas, he notes.

In 2018, Saab and Maxar conducted Gripen flight tests using a pod-housed camera to assess the potential of such a system, and in 2020 this work was expanded to conducting real-time processing with the airframer’s Gripen E/F demonstrator aircraft. 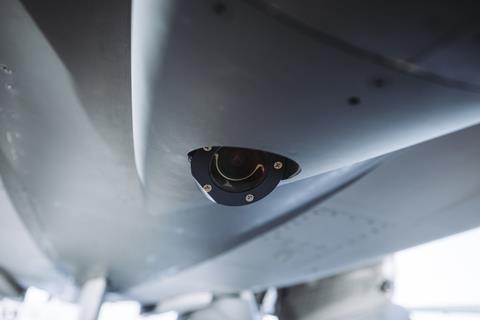 Saab has already tested a camera installation for real-time odometry

“It was a success,” says Tobias Jansson, product manager Gripen. Additional flight testing could take place in around one years’ time, he says.

Saab’s terrain navigation knowledge dates back to the 1980s and the Viggen fighter. Its technology was subsequently enhanced for the Gripen programme, but was not adopted by Sweden, which instead opted to rely on the GPS system.

Referring to the expanding A2/AD threat, Jakobsson notes: “If you are a country that doesn’t have its own national GNSS system then you are dependent on someone else. You don’t have autonomy to say ‘we can always rely on having 100% access’.”

Jansson reveals that the full GNSS-denied navigation capability has been offered to Finland as part of Saab’s HX programme offer of 64 Gripen Es and two GlobalEye surveillance aircraft. “We think that this capability is important to a country that is very close to an adversary that has this [jamming] capability,” he says.

Jakobsson notes that the system would also be of value in supporting operations using dispersed bases – a tactic which is employed by both Finland and Sweden to reduce vulnerability to strikes against air bases.

The Gripen already has a claimed unique capability to perform a so-called “nav” landing using GPS. “Now, instead of GPS, we will use this functionality,” Jakobsson says. “But then, to take it a step further, autoland is something that we have discussed and have studies on.”

Such an “off-the-grid, automatic IMC [instrument meteorological conditions] approach and landing” function “would be very useful in a wartime scenario”, he notes.

“We think that this is one of the cornerstones you will have, to face GNSS-denied operations,” Jansson says. Operational capability for the full system, including 3D mapping, could be achieved “within three to five years”, he suggests.

An odometry-based solution also would be “super-easy” to introduce for the Gripen C/D via software updates, Jansson says. “There is a large interest from existing [Gripen] customers, and we continue that discussion,” he adds.

The modular technology also has potential application for other platform types, such as GlobalEye and unmanned air vehicles, plus air-launched weapons, Saab believes.