Saab is offering 64 Gripen E fighters, a pair of GlobalEye surveillance jets, and an extensive weapons package to Finland as its best and final offer for the nation’s HX Boeing F-18 replacement contest.

Detailing the proposal on a media webcast on 30 April, Saab chief executive Micael Johansson said he was “extremely proud” to submit his company’s offer to the Finnish defence forces. 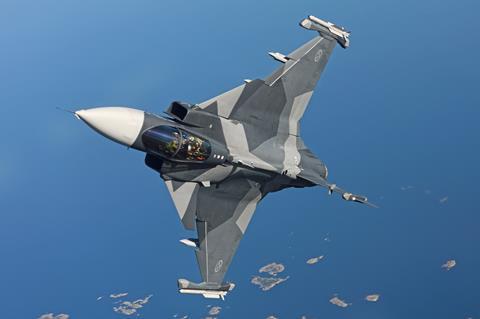 In addition to the hardware, Johansson says Finland’s aerospace and defence industries will benefit hugely from participation in Gripen production and sustainment.

This includes in-country final assembly of an undisclosed number of the fighters and their GE Aviation F414G engines, plus aerostructures manufacturing and sustainment activities. In addition, Saab intends to create a Finnish “systems centre” to enable rapid capability updates to both platforms.

“It would be fantastic to have two production capabilities on both sides of the Baltic Sea,” says Johansson, which would better allow Saab to address continued sales interest in the Gripen E.

Saab is staying coy on the final number of aircraft to be built in Finland, but notes that to have all 64 locally assembled would “have an impact on delivery schedules” and would have required two Finnish production lines, which “would not have been economically feasible”, says Saab’s HX campaign director Magnus Skoberg.

While it would be “most cost-effective” to produce all the jets at Saab’s Linkoping site in Sweden, Skoberg says this would not create the required capabilities to allow the aircraft to be supported locally.

“You need to remember this is not at all purely a question on economy of scale or industrial needs – we don’t necessarily need another production line to build fighters for our customers or the world market; there is a strong need to establish [such a] capability in Finland for security of supply.” 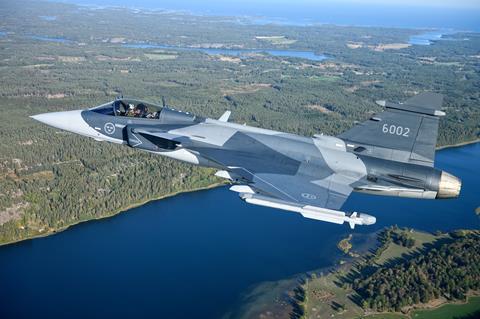 An undisclosed number of fighters will be assembled locally

He points out that the Gripen’s design means that unlike other platforms, final assembly is “not just to connect the ready-made Lego pieces together”, but a deeper process that will involve significant “knowledge transfer”.

In all, Saab has committed to 118 projects in Finland – 46 directly related to the Gripen and 72 broader initiatives regarding advanced materials or manufacturing, for example. A further 22 projects are included in the offering, says Skoberg. This means that the company “has quite a decent margin” above the 30% offset value stipulated in the tender.

Gripen E deliveries would begin in 2025 and run until 2030; initial operating capability is targeted by 2027. The GlobalEyes, which are based on the Bombardier Global 6000 business jet, would arrive in 2026 and 2027.

Saab opted to include the two airborne early warning and control jets in its offer based on the military scenarios Finland is likely to face, says Skoberg. “The capabilities it is providing give us an extra edge to our offering,” he says.

“The Gripen’s efficiency in terms of cost and sustainability are the enabler for us to also include GlobalEye into this equation.”

Although Bombardier will at some point switch production from the Global 6000 to the new Global 6500, Skoberg says he has received assurances from the Canadian airframer that this crossover will not take place until after the aircraft are required for Finland. 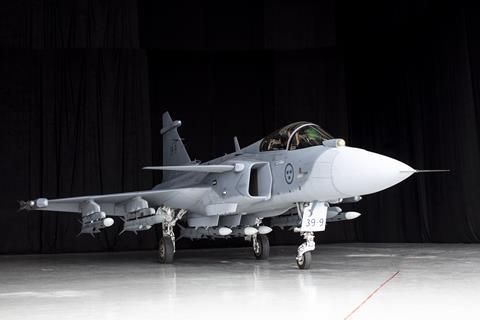 Weapons are worth in excess of 20% of the overall €9 billion ($10.9 billion) contract value, including MBDA’s Meteor and Spear missiles, the IRIS-T from Diehl Defence and Taurus Systems’ KEPD 350. However, Skoberg says additional undisclosed munitions have also been proposed.

Electronic warfare (EW) capability is built into the Gripen E, he adds, including the integration of the company’s new jammer pod and Lightweight Air-launched Decoy Missile, the latter using the same triple launcher as the Spear missile.

An “extensive” spares and support package – including engines and structural parts – is included within the offer.

While the bid is focused solely on the single-seat Gripen E, Saab has left the option open for Finland to add twin-seat F models if required.

Sweden is acquiring the Gripen E and could favour the GlobalEye to meet its future surveillance needs, and Saab believes that the interoperability with its neighbour will be an additional selling point.

Helsinki is expected to select its preferred candidate later this year. Other contenders include the Boeing F/A-18E/F Super Hornet and EA-18G Growler, Dassault Rafale, Eurofighter Typhoon and Lockheed Martin F-35A.