Boeing is preparing a series of flight tests in Goa to demonstrate the take-off and landing capabilities of the F/A-18E/F Super Hornet from Indian aircraft carriers.

The tests are planned in the May-June timeframe and will see the US company dispatch two US Navy (USN) F/A-18Es to the Indian navy’s Shore-Based Test Facility at INS Hansa near Goa. 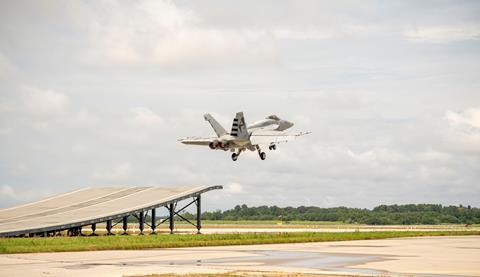 The F/A-18E’s first launch from a ski-jump at NAS Patuxent River, Maryland in August 2020

The jets will demonstrate the ability to take-off using a ski-jump ramp, and also make arrested landings on a runway configured as an Indian carrier, says Alain Garcia, vice-president of India business development for Boeing Defense, Space & Security.

The work will involve a composite team of Boeing and USN. Different aircraft configurations, such as air-to-air, air-to-surface, and anti-ship will be demonstrated.

New Delhi has had a long-running requirement for 57 new carrier-capable fighters. Initially, it is likely to obtain a first tranche of 26 aircraft, of which eight need to be two-seaters. For the time being the Indian navy is assessing its options, and has yet to produce a formal request for proposals (RFP).

The Super Hornet’s primary rival for the requirement, the Dassault Rafale M, reportedly completed a series of similar tests at INS Hansa in January. Saab has also proposed a carrier-capable version of the Gripen E, the Gripen Maritime.

Garcia, who formerly flew the Super Hornet in the USN, is confident that the Boeing type is eminently well suited for India, noting that the Block III configuration – which is on the verge of entering US service – plays an important role in creating a common tactical picture.

He lists several attributes of the Block III Super Hornet, such as its active electronically scanned array radar, large area displays, ability to communicate with other platforms, and open systems architecture.

He feels the type will integrate well with other US equipment in service with the Indian navy, such as the Lockheed Martin/Sikorsky MH-60R anti-submarine warfare helicopter and Boeing P-8I Neptune, the Indian variant of the 737-derived P-8A. Moreover, a Super Hornet acquisition would also allow the Indian navy to work more closely with the USN and Royal Australian Air Force, both of which operate Super Hornets.

New Delhi has one operational carrier, the INS Vikramaditya, derived from former Soviet Kiev-class carrier Baku. By American standards it is small, with a displacement of 45,400t, less than half that of the US carriers from which the Super Hornet typically operates. Vikramaditya’s fixed-wing air wing now comprises 26 RAC MiG-29Ks. 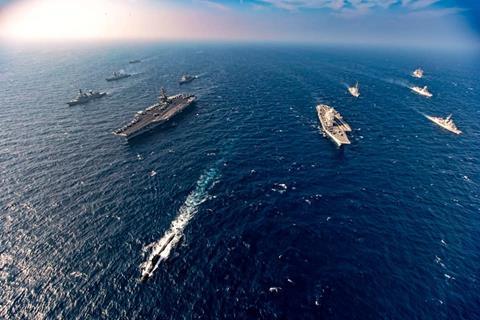 The USS Nimitz (left) and INS Vikramaditya (right) in late 2020

In addition, New Delhi is preparing its first indigenously-built carrier, the INS Vikrant, for active service. The Vikrant’s displacement is listed at 45,000t.

Both are short take-off but arrested recovery (STOBAR) vessels and use a ski-jump to launch aircraft. US and French carriers are catapult assisted take-off but arrested recovery (CATOBAR) ships. While CATOBAR carriers are more complicated, aircraft can take off with heavier payloads. Moreover, such vessels also can launch turboprop support assets, namely the Northrop Grumman E-2 Hawkeye airborne early warning and control aircraft.

Longer term, India could also develop a CATOBAR vessel using an electromagnetic launch system similar to that being pioneered aboard the USS Gerald R Ford.

Irrespective of the major differences between US and Indian carriers, Garcia feels the Super Hornet will perform well in Goa. He notes that the type has already undergone ski-jump tests at NAS Patuxent River in Maryland. In Goa, the Super Hornet will even demonstrate the ability to take off with two Boeing AGM-84 anti-ship missiles, although the Indian requirement only calls for the carriage of one anti-ship missile.

Garcia declines to detail the payload penalty that using a ski-jump versus a catapult will impose on the Super Hornet, but says the fighter has the payload capability while operating off a ski-jump to meet all requirements.

“They’ll really be able to see how accurate the Super Hornet is in its ability to land on any given flight deck area,” he says. “We’re so confident that we actually told the Indian navy that we’re more than happy – if they have an aircraft carrier parked off the coast of Goa – to go fly out there and demonstrate it on the aircraft carrier itself.”

The Indian navy has yet to take Boeing up on this proposal, so the Super Hornets will undergo the tests on land at INS Hansa. 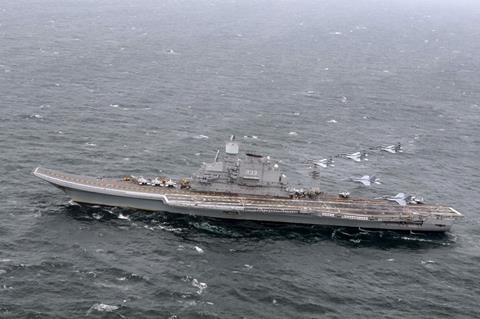 Garcia adds that Boeing has provided New Delhi with considerable analysis of how Super Hornets would fit aboard Indian carriers, on the flight deck as well as in the hangar.

One challenge with both Vikramaditya and Vikrant are relatively small elevators optimised for the MiG-29. Garcia says that one advantage that the Super Hornet has over Rafale is the ability to fold its wings, allowing for an easier elevator fit. In addition, Boeing has devised a way for Indian deck crews to move the Super Hornet onto and off Indian carrier elevators.

Garcia also points out that the Super Hornet’s two-seat version, the F/A-18F, is fully capable and serves aboard US carriers. While the air force variant of the Rafale has a two-seat B version, the carrier-capable Rafale M only comes with a single seat.

While the test work at Goa suggests that there is some traction toward an acquisition decision, New Delhi’s patchy record with fighter acquisitions could suggest that a final decision is some years away – if ever. Underlining this, New Delhi has yet to issue an RFP for the naval fighter acquisition, although a 59-page request for information first emerged over five years ago, in early 2017.

Nonetheless, New Delhi’s long-term ambition to boost its aircraft carrier capability is clear. The upcoming Super Hornet tests in Goa – and what the Indian navy takes away from them – will mark an important step toward the achievement of this vision.