Tunisia has received its first of eight Beechcraft T-6C trainers, making it the second African nation to field the turboprop-powered type.

Textron Aviation Defense announced the milestone on 8 November. The aircraft has been transferred to the Tunisian air force’s Sfax air base, for use by the service’s 13 Sqn, it says. 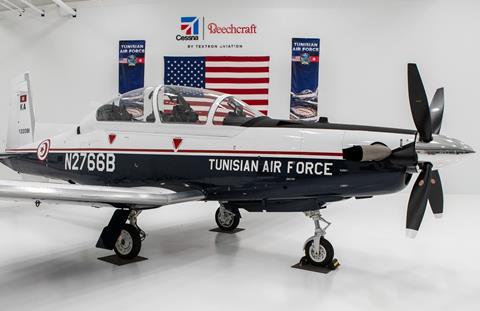 Lead aircraft has now been transferred to Sfax air base

The company expects the nation’s second aircraft to be transferred late this year, with the remainder “slated for delivery in 2023”.

“Becoming a regional leader in military flight training excellence is one of the milestones on the path to achieving our counter-terrorism and border security mission requirements,” says Tunisian air force chief of staff General Mohamed Hajjem.

He notes that in addition to boosting “territorial sovereignty and regional stability”, the acquisition “paves the way for additional bilateral engagements, and strengthens our relationship with the United States”.

Meanwhile, the lead Tunisian aircraft is the 1,001st example of the T-6 to have been delivered, to a total of 13 nations, the airframer says.