Mission capable rates have declined for both US Air Force (USAF) and US Navy (USN) aircraft, according to the US Government Accountability Office (GAO).

In a new report, the GAO took a close look at readiness for four USAF and four USN platforms from 2015 to 2021. 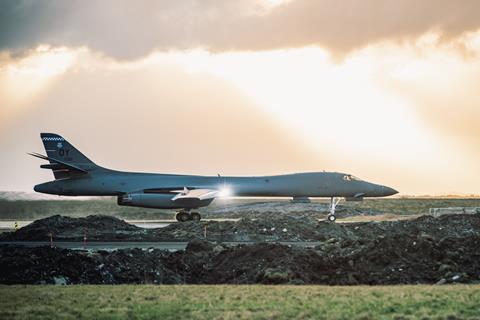 A USAF B-1B at Orland air base in Norway. Mission capable rates for the type declined from 2015 to 2021

“Unit maintenance personnel we spoke with on this review acknowledged a decline in mission capable rates as a result of delays in completing unit level maintenance,” says the GAO.

Issues range from inexperienced maintainers, who require resources to train up, to spare parts shortfalls. Cannibalisation of parts between aircraft is also a common practice.

Some cannibalised parts are hard to access and not designed to be removed. Moreover, if the part breaks it could result in two aircraft becoming non-mission capable.

It gives the example of the B-1B’s wing radomes, which protect the bomber’s antennae. The part is “very fragile”. Every time it is moved between aircraft there is a risk of it breaking.

“Since this part is no longer being manufactured, B-1B officials said there is a significant risk that an accident could render multiple aircraft non-mission capable for a long period of time,” says the GAO.

In addition, cannibalisation masks the number of missing parts, which exacerbates the sustainment challenge.

Other challenges for USAF and USN maintainers include accessing electronic technical manuals owing to issues such as a lack of stable Internet connections, and that some equipment on aircraft is proprietary to defence contractors.

“Two of the selected aircraft in our review – the F-22 and the KC-135 – have components whose data are proprietary to the manufacturer or vendor and are not easily accessible by unit maintenance personnel, which can hinder the units from performing maintenance,” says the GAO.

The GAO acknowledges that the USAF and USN have taken some steps to address unit-level maintenance issues, but feels these are insufficient. It suggests that Congress require both forces to submit mitigation plans related to maintenance challenges, and place far greater priority on sustainment reviews.