The US Air Force (USAF) is serious about advanced designs for tanker and transport aircraft to address the emerging threats from near-peer adversaries.

Air Force Secretary Frank Kendall says a current major focus for the service is what he refers to as “cross-cutting, enabling capabilities”; namely a focus on electronic warfare (EW), munitions, and mobility in the form of tankers and transports. 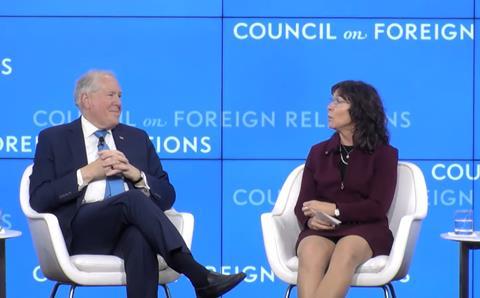 “Mobility is driven by the threat chain… what the threat is doing to reach out to increasingly long ranges to engage our aircraft,” says Kendall.

He made the remarks to the Council of Foreign Relations in response to a question about the USAF’s ageing tanker fleet of Boeing KC-135s and McDonnel Douglas KC-10s, and their viability in any long-distance conflict with China in the Western Pacific. Some of the KC-135s are gradually being replaced by the Boeing KC-46, based on the 767 airliner.

“Traditionally, we could take a commercial grade of aircraft and turn it into a tanker or transport. They’re not designed with a high set of requirements for survivability or resilience, and the threats are taking that freedom away from us.”

He adds that while transports such as the Boeing C-17 are purpose built for military transport, “they essentially look like a commercial aircraft”.

As such, the USAF is looking at “next generation” capabilities, of which a blended wing body design is “one of the very prominent candidates… we are doing some early design work on that and possibly moving towards a prototype as a [Department of Defense] programme. But there’s more to come on that and it’s a work in progress.”

Blended wing body aircraft have the potential for a far smaller radar cross section than traditional transports and tankers, which should improve survivability against advanced threats such as China.

Kendall stresses, however, that this is still a work in progress.

“We recognise the need,” he says. “We’re continuing the current tanker modernisation, which is basically a recapitalisation, but I think we’re going to have to move beyond that to the next generation.”

Kendall did not touch on the possibility of a “bridge” tanker between the KC-46 and a future design.

In October 2022, the USAF said it would test a blended-wing aircraft in 2027 that could ultimately serve as an aerial refueller or transport aircraft.

Regarding EW, Kendall suggests the field has been somewhat neglected. On munitions, he says that the Ukraine War and other conflicts highlight the challenges of producing sufficient precision weapons during wartime.

More generally on China, Kendall says that he hopes Beijing, which has embarked on a massive arms build up in recent years, takes the right lessons from the war in Ukraine.

These, in his view, are the severe economic consequences of military aggression.

Another is to be careful about listening to generals. “Your military may not be as good as they are telling you,” he says.

Finally, he stresses the sheer uncertainty inherent in modern warfare, given that it is impossible to be sure how people and advanced, untested systems perform at scale.

“The war you anticipate may not be the war you get. That short, decisive war you expected that’s going to last a matter of a few days, may drag on for a year or more and be much more costly than you expect.”