The US government has again expressed concern about Chinese efforts to gain control of Ukrainian engine manufacturer Motor Sich.

In a 26 August call with Ukrainian president Volodymyr Zelensky, US Secretary of State Michael Pompeo brought up the issue. 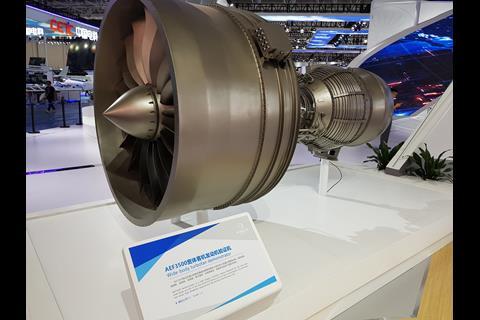 A model of China's proposed AEF3500 powerplant for widebody aircraft, at Airshow China in 2018 “Secretary Pompeo raised US concerns regarding malign [People’s Republic of China] investment in Ukraine, including Beijing’s efforts to acquire the Motor Sich engine manufacturer,” says the department of state.

In early 2017, Beijing Skyrizon Aviation reportedly obtained a 41% stake in the Ukrainian aircraft engine maker, but this was put on hold in September 2017 for review by Kiev.

In his memoir The Room Where It Happened, former US National Security Adviser John Bolton recounted an August 2019 trip to Kiev, where China’s interest in Motor Sich and airframer Antonov were the main topics in his discussions with Ukrainian officials.

Beijing has invested considerable resources to develop both military and civilian powerplants at home. Foreign engine technology is also understood to be a major target of Chinese espionage.

Motor Sich, which produces a range of turbofan, turboprop and turboshaft engines, has the potential to be a valuable source of knowledge for Chinese engine designers.

While Beijing has made considerable progress, a large number of its operational fighters, such as the Chengdu J-10 and Shenyang J-11A, are powered by Russia’s Saturn AL-31. The Xian Y-20 strategic transport meanwhile relies on four Aviadvigatel PS-30s, though it will eventually be powered by the Shenyang WS-20.

In its annual report about Chinese military developments in May 2019, the US Department of Defense stated that China continues to struggle in two areas – radars and engines.