Reflecting China’s increasingly belligerent rhetoric and actions against Taiwan, the US government may accelerate the delivery of Taipei’s new Lockheed Martin F-16V fighters.

According to a report by Reuters, quoting unnamed sources, the Biden administration could accelerate the deliveries of the 66 jets, which are now slated for delivery from 2026. 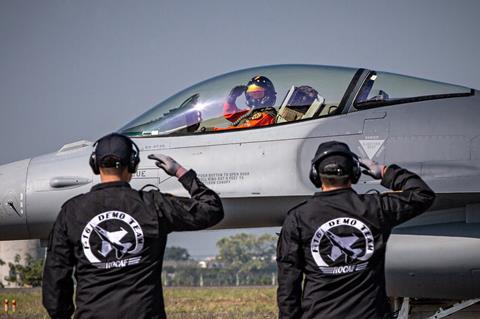 An upgraded Taiwanese F-16V in November 2021

Democratically-governed Taiwan ordered the F-16Vs in 2019 after attempting to secure new fighters for well over a decade.

The year 2021 saw nearly 1,000 Chinese intrusions into Taiwan’s ADIZ, more than double the number of sorties recorded the previous year. The flights are gauged to probe and assess the readiness of Taiwanese forces.

As with all US arms sales to Taiwan, any acceleration of F-16V deliveries to Taiwan would likely prompt Beijing to express outrage. The Chinese Communist Party sees Taiwan as a breakaway province, and has not ruled out using force to unify it with the Mainland.

Cumulatively, the three countries have 54 examples on order. Bringing Taiwan forward in the queue would entail negotiations with these three customers.

Separately, Taiwanese media reports that Taiwan’s air force has resumed flight operations with its recently-upgraded F-16Vs. The fleet had been grounded for safety checks following the fatal crash of an F-16V off the country’s west coast on 11 January, in which the jet’s pilot was killed.

In November 2021, Taiwan commissioned its first batch of upgraded F-16Vs. At that time, Taiwanese media reported that 64 of 141 F-16A/Bs had been upgraded to the F-16V standard. Local airframer AIDC is performing the work with assistance from Lockheed.