The US Air Force (USAF) says it has successfully tested a fully-assembled version of a prototype hypersonic cruise missile.

The service said on 12 December that it launched a Lockheed Martin AGM-183 Air-Launched Rapid Response Weapon (ARRW) from a Boeing B-52 bomber off the coast of California. The test took place on 9 December. 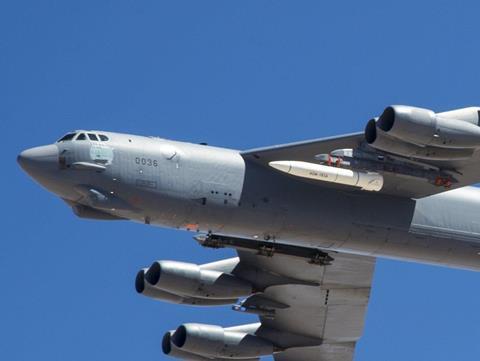 “Following the ARRW’s separation from the aircraft, it reached hypersonic speeds greater than five times the speed of sound, completed its flight path and detonated in the terminal area,” the USAF says. “Indications show that all objectives were met.”

While this was not the first successful test of the Lockheed-designed hypersonic weapon, the USAF says it marks the first time it launched a full prototype operational missile.

Such a fully-assembled system is known as an “all-up-round” in defence parlance. Previous ARRW tests focused on specific components, such as proving booster performance.

The ARRW was first tested in 2019. At the time, the USAF said it hoped to have a hypersonic weapon at initial operating capability by 2022, but that timeline proved overly optimistic.

That agency announced a successful test of the scramjet engine-powered hypersonic vehicle in April 2022.

The development of hypersonic-capable weapons, and the means to counter them, has become a major focus for defence leaders in Washington DC and Beijing in recent years.