The test of the new GBU-72 weapon took place on 7 October from 35,000ft, the USAF says. Performed by the 40th Test Flight Squadron, the drop test was the last item in a series of tests that included the first-ever live weapons load, flight and release of the weapon. 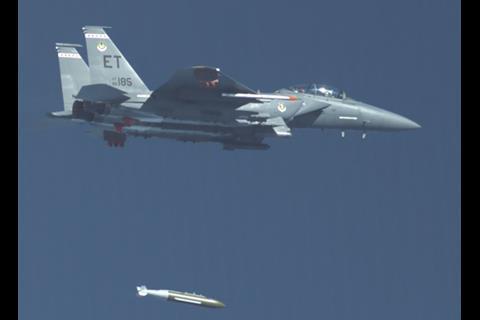 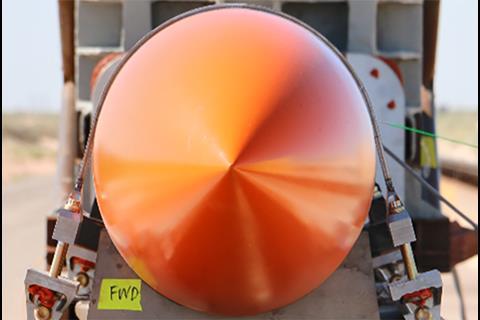 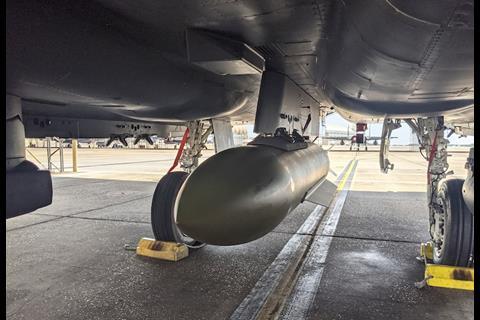 The GBU-72 mounted on the F-15E's centreline 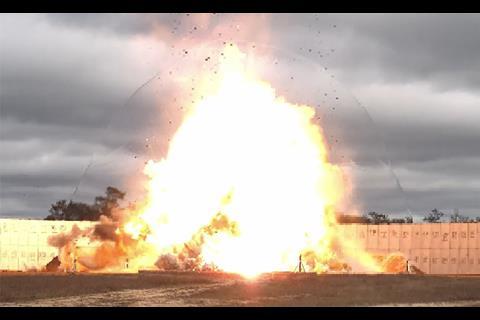 “The squadron’s test goals were to show the weapon could safely release from the aircraft and validate a modified 2,000lb Joint Direct Attack Munition [JDAM] tail kit’s ability to control and navigate a 5,000lb weapon,” the service says.

A USAF image shows the weapon mounted on the F-15E’s centreline.

The test included what the USAF calls its “largest-ever arena test”, whereby a range of sensors measured the blast’s lethality.

The GBU-72 was designed to destroy deeply buried targets, and can be carried by both fighter and bomber aircraft. The weapon’s design benefited from advanced modelling and simulations before the forging of the first warhead.

According to GBU-72 programme manager James Culliton, the weapon will be considerably more lethal than legacy bunker busters such as the laser-guided GBU-28, a 2,270kg weapon that has been in use for three decades.

“An advantage to the modelling and simulation to design approach used is early prototypes are production representative,” says Culliton.

“This helps us bring our operational test partners in sooner with eyes-on, hands-on participation, validating our design and procedures sooner while including input that improves the weapon.”

The programme will now move to additional JDAM integration test flights, as well as developmental and operational testing in 2022.