The US Mitchell Institute contends that the US Air Force (USAF) needs a new generation of precision-guided munitions (PGMs) to effectively deter and fight major powers such as China and Russia.

The institute believes systems such as the Boeing Joint Direct Attack Munition (JDAM) were effective in the more permissible airspace the USAF encountered in recent years, but are not well suited for use in highly-contested environments. 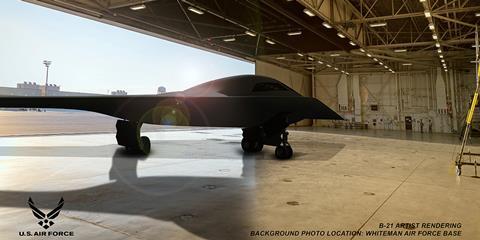 Artist’s impression of the Northrop Grumman B-21

It believes an emphasis should be placed on mid-range “stand-in” weapons, with ranges between 50-250nm (92.6-463km), that use wings to reach targets. This allows penetrating strike aircraft to remain outside a target’s point defences.

“Because of the very short range of direct attack weapons, fighters and bombers that employ them – including stealth aircraft – would have to approach too close to point defenses surrounding targets to release them,” says a newly released paper by Mark Gunzinger, a former USAF colonel who is now Mitchell’s director of future concepts and capability assessments.

“Plus, most of the Air Force’s legacy PGMs like JDAM are non-stealthy weapons that are increasingly at risk of being intercepted or otherwise rendered ineffective by advanced air and missile defenses.”

The Mitchell Institute has long contended that manned platforms, namely the developmental Northrop Grumman B-21, have a key role in penetrating adversary airspace and prosecuting high-value, well-defended targets that can be hardened or mobile.

“The Air Force should prioritize fielding ‘5th generation weapons’ to take full advantage of the range, survivability, and capability of its stealth aircraft to complete kill chains independently in contested environments.” 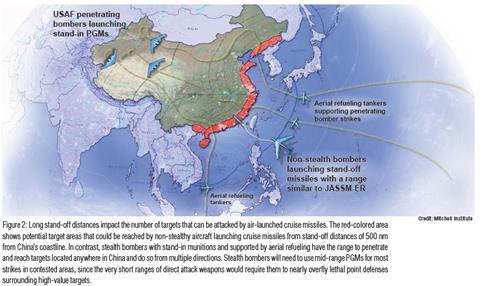 The paper states that the USAF will need weapons to strike up to 100,000 “discrete aimpoints”, with the size of the weapon optimised for carriage aboard stealthy platforms. Unit costs should be at $300,000 or below, which can be supported by limited budgets.

In addition, the new family of PGMs should have low-observable characteristics to help defeat enemy air defences, and be effective against targets that are “increasingly mobile, relocatable, hardened, or deeply buried”.

The paper also warns about the danger of relying on non-stealthy aircraft deploying weapons from stand-off ranges. It believes that a war against China and Russia would quickly see stocks of the Lockheed Martin AGM-158 Joint Air-to-Surface Standoff Missile Extended Range (JASSM-ER) depleted. Once these weapons are used up, the non-stealthy aircraft would effectively be “out of the fight”.

“A munitions mix that includes much larger numbers of more affordable mid-range stand-in munitions would create a deeper magazine for the Air Force’s warfighters,” it says.