Some names stick. Bell designates the latest incarnation of the venerable AH-1 attack helicopter as the AH-1Z Viper – sometimes referred to as the ‘Zulu’ in casual conversation. The most recent version of the UH-1, meanwhile, is the UH-1Y Venom.

While the Viper and Venom are thoroughly new rotorcraft, the marines of squadron HMLA-169 use the names their fathers and uncles used for the original AH-1s and UH-1s that served in the Vietnam War: Cobra and Huey.

“I wasn’t sure what you guys meant when you kept talking about the Zulu,” says one young marine. “We call it the Cobra.”

He made the remark to a group of defence journalists visiting Marine Corps Air Station Futenma on the Japanese island of Okinawa. The air station buzzes with activity as marine maintainers work on a small fleet of AH-1Z’s and UH-1Ys. Across the tarmac, a sister marine squadron works on a row of Bell/Boeing MV-22 Ospreys.

Okinawa is a linchpin of US strategy in the Asia-Pacific. In addition to Futenma, there are several other US and Japanese locations on the island, including major air bases at Misawa and Naha. Okinawa is strategically located between Japan and Taiwan and relatively close to another US ally, South Korea. It is difficult to imagine a major contingency in the Asia-Pacific that would not require the range of capability on offer with HMLA-169. 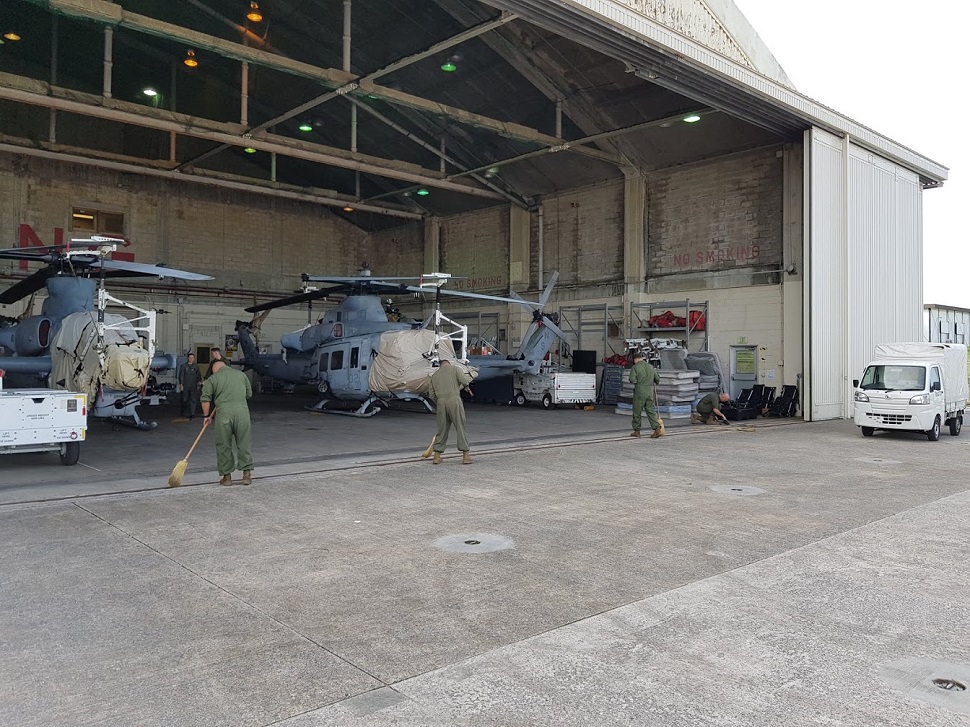 Despite strikingly different silhouettes, the AH-1Z and UH-1Y have 85% commonality, making them easier to support in austere bases or aboard cramped amphibious assault ships.

Bell continually stresses that that they are marinised at the point of manufacture. It claims that this is essential to ensure continued operations in challenging littoral or maritime environments. Both helicopters are also hardened against the electromagnetic interference produced by warships’ radars and communication systems.

Their designations belie how much they have evolved over the years. Though the AH-1Z visually resembles previous iterations of the AH-1, it was effectively developed from the ground up by Bell. Packed with advanced sensors and capabilities, its maximum gross weight is 18,100lb, a third greater than the AH-1W it is replacing in USMC service. It can carry 16 Lockheed Martin AGM-114 Hellfire anti-tank missiles as well as a pair of Raytheon AIM-9 Sidewinder air-to-air missiles. The AH-1Z’s chin-mounted 20mm rotary cannon can be slaved to where the pilots look, or can be set to fire at a target pinpointed with the helicopter’s laser designator. When firing, a sensor compensates for aircraft speed and the wind, ensuring accuracy, and also makes compensations to limit the effect of recoil. This array of weaponry secures a spot for the AH-1Z among the world’s most lethal attack helicopters.

The UH-1Y meanwhile is a major upgrade over its predecessor, the UH-1H, with a glass cockpit and greater power via an upgraded pair of General Electric T700 engines – the same powerplant as the AH-1Z. Unlike their ancestors, both helicopters have composite rotors that are more resistant to enemy fire than traditional rotor blades. 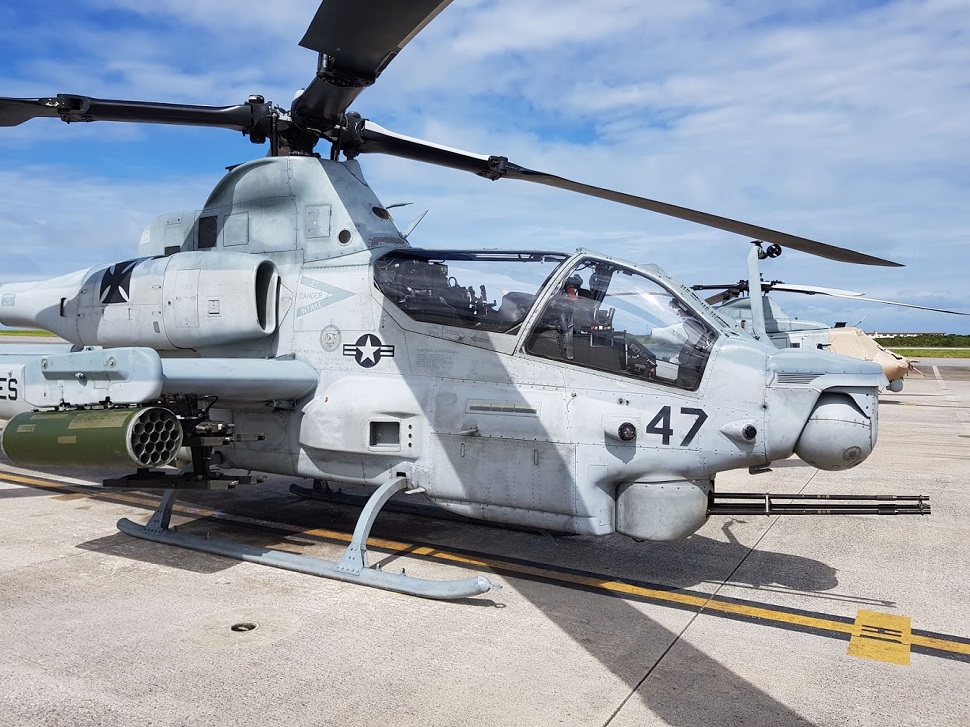 Captain John Kelly is a seasoned AH-1Z pilot. He estimates that 70-80% of the squadron’s training involves a simulated amphibious assault scenario and describes a typical exercise. First, USMC Lockheed Martin F-35Bs eliminate an enemy’s air defences and provide support on the electromagnetic spectrum. Then the AH-1Zs would then make their entrance, using a mix of Hellfires missiles, 2.75in rockets, and cannon fire to engage tanks, vehicles, and personnel. Kelly says that a two helicopter “section” of AH-1Zs can destroy up to 30 tanks.

The gunships are followed by the UH-1Zs, which deploy an initial force of marines to secure the landing zone. The UH-1Zs, armed with a mix of door guns and rockets, would then take off and remain in the vicinity with the AH-1Zs to provide fire support. The final wave would come in the form of V-22s, landing to deploy up to 24 marines each before taking off again.

Pilots swap between the front and back seats of the AH-1Z as the two glass cockpits are virtually identical. Having two identical stations manned by two pilots improves the chances of an AH-1Z completing a mission should one crew member become a casualty. Novice pilots are paired with more experienced colleagues. The cockpits are fully compatible with night vision goggles and the marines place a premium on training at night and in difficult conditions. 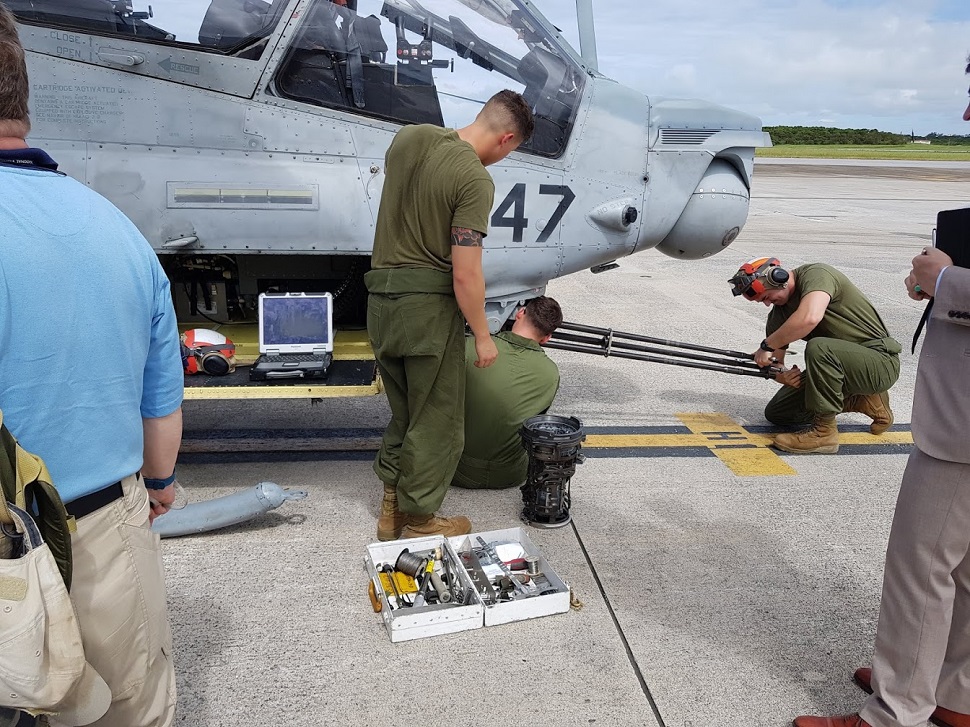 Kelly’s colleague, Captain Shawn Leighton, pilots the UH-1Y. While it lacks the sheer firepower of its attack helicopter sibling, Leighton likes the sweep of missions the utility type operates. These range from the transport of troops and cargo to combat search and rescue.

He describes the UH-1Y operating environment as “dynamic” with four crew members. In addition to the two pilots, the UH-1Z operates with two crew chiefs, both manning guns, in the back.

He reckons the most challenging mission is rescuing a downed pilot. These operations call for a rapid response and generally there is little time for planning. Such a rescue involves coordinating with AH-1Zs as well as fixed wing aircraft that can provide fire support from above – both the AH-1Z and UH-1Y can designate targets for other aircraft. For rescue missions, he says the crew must “make sure we’re not falling into a trap”. When they make contact with the rescue subject, it is essential to confirm his or her identity before departing.

Sergeant John Cannon, a UH-1Y crew chief, is experienced operating both the 7.62mm mini-gun and .50 caliber machine gun from the UH-1Y. Generally, UH-1Ys will have one of each type of gun on either side. The guns can easily be swapped in and out for specific missions. The .50 caliber is optimal for situations where tanks or other vehicles need to be engaged at longer rangers, while the 7.62mm mini-gun, which fires 3,000 rounds per minute, is better for fire support against personnel. 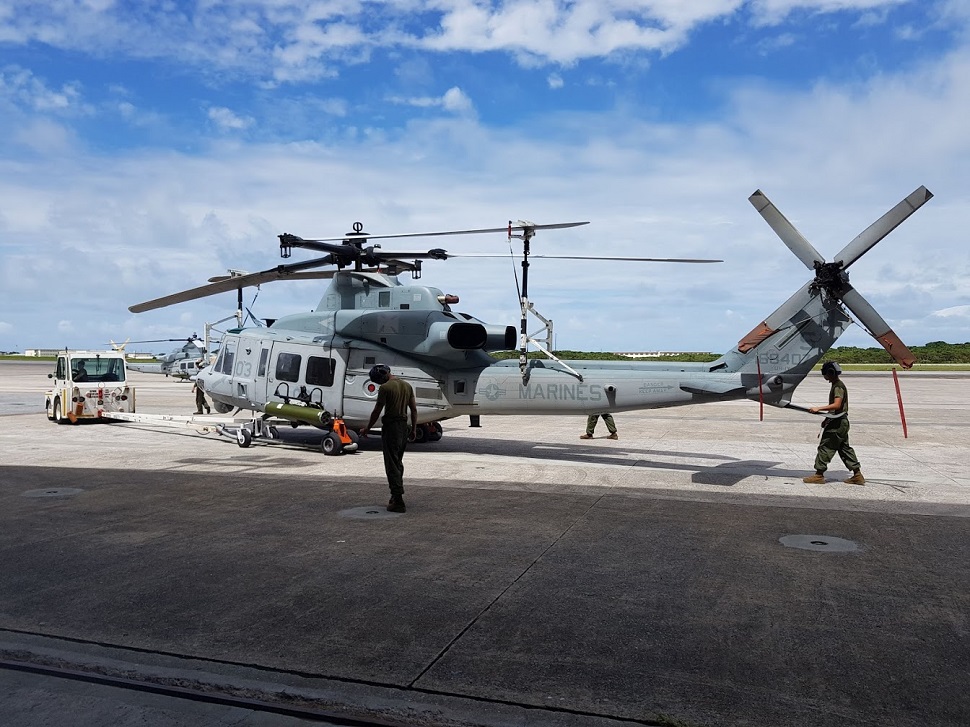 “I wouldn’t want to be anything but a marine,” says Cannon. Asked if he enjoys firing weapons from a helicopter, he gives a brief smile. “My main concern is firing the weapon over the heads of our guys on the ground,” he says. He stresses that training is key to operating a helicopter door gun effectively, and that one mark of an experienced door gunner is the ability to clear jams rapidly.

The arrival of the BAE Systems Advanced Precision Kill Weapons Systems (APKWS), a laser guidance kit for standard 2.75in rockets, gives the UH-1Y its first guided weapon. APKWS is also carried by the AH-1Z in its pair of 19-round rocket pods. Despite the arrival of APKWS, however, Kelly and Leighton say the old-school unguided rocket still has a place. The believe unguided rockets are especially useful for loosing off a few quick rounds at a target that appears suddenly and needs to be immediately addressed.

The marines also give high marks to AH-1Z and UH-1Y sustainment both on land and sea. The rotors of both can be folded and unfolded within minutes, optimising storage aboard ships and in hangars. For high wind situations aboard a ship a special bracket is used to secure the blades in place.

Following sales success in Bahrain and the Czech Republic, Bell has high hopes for the AH-1Z and UH-1Y in the Asia-Pacific, where there are potential sales in South Korea, Japan, Australia, the Philippines, and Thailand. It also believes that the UH-1Y is suitable to replace the Kaman SH-2s that New Zealand will retire in the coming decade.

Victor Chin is Bell’s Singapore-based senior manager, Global Military Sales and Strategy. Before joining Bell he spent years in the marines flying the Boeing CH-46 “Phrog,” the twin rotor type replaced by the V-22. A good part of his career involved time in Okinawa. He repeats the Bell mantra that marinisation is a key consideration for operating helicopters at sea or in tropical environments: “I always tell people to talk to the US Marines to see how their experience is with the AH-1Z and UH-1Y.”