Alenia Aermacchi used the DSEI exhibition in London to highlight the potential for its C-27J platform to perform a wide variety of duties for the UK Royal Air Force, potentially include maritime surveillance.

Displaying a model of the Spartan on the Finmecannica group stand with a Union Flag tail marking, the company stressed the type’s existing use of almost 38% UK content by value, with this including its Rolls-Royce AE2100 engines. 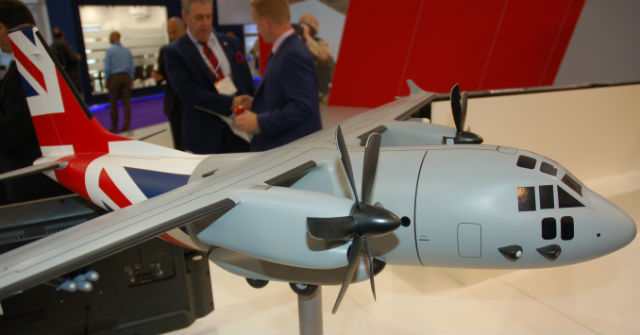 A multi-mission aircraft offer to the UK would include a maritime search radar, mission system, electronic warfare and defensive aids system equipment from Selex ES, and air-launched weapons from MBDA. The latter could include the Brimstone air-to-surface missile, which would enable an MC-27J-type platform to deliver direct fire support to land forces, Alenia Aermacchi says.

Brian Burridge, vice-president strategic marketing at Finmecannica UK, believes the C-27J could also provide a valuable service by filling the future airlift gap that will exist between the Airbus A400M tactical transport and Boeing CH-47 Chinook transport helicopter. With an operating cost of around $2,500/h, the twin-turboprop could also be used to meet future intelligence, surveillance and reconnaissance requirements, he believes.

While Alenia Aermacchi’s existing customer base for the C-27J has acquired the aircraft as a medium transport, it has also been employed for VIP transport, medical evacuation, and by the Italian air force in Afghanistan to counter the threat posed by improvised explosive devices. The service is soon to expand its capabilities in this area, with a Jedi 2 payload in development.

In the maritime surveillance arena, the US Coast Guard will next year begin operating an eventual 14 of the type equipped with search radars, and Alenia Aermacchi is currently in discussions with an undisclosed potential buyer for a maritime patrol development.

Meanwhile, Alenia Aermacchi is continuing its development of the C-27J, with a winglet modification in the advanced stages of certification and a roughly 10% increase in engine power to enhance take-off performance. To be achieved via a software modification, the latter is expected to be production-ready by 2016 or 2017.