GE Aviation has completed dust-ingestion testing on its new GE9X engine for the Boeing 777X, as the propulsion specialist eyes a potential third application for the widebody turbofan.

Performed at the manufacturer’s facility in Peebles, Ohio, the trial saw the 110,000lb-thrust (489kN)-class powerplant run for a total of 1,600 cycles while a stream of dust particles was injected into the engine. 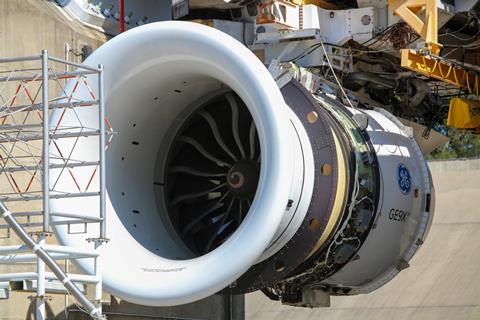 Engine was run for 1,600 cycles during dust-ingestion test

“We really put it to the test,” says Karl Sheldon, programme manager for the GE9X. But borescope inspections of the turbofan after 1,500 cycles “looked really good”, he says, “particularly the hot section”.

“That’s why we were able to extend the test for a 100 cycles beyond what we had planned.”

A full module and component tear-down will be performed over the coming weeks to verify the initial findings, he adds, with the results available in early 2022.

Although delays to the 777X programme itself created breathing room to allow the testing to take place, GE says experience from its previous engine developments – where dust-ingestion trials were carried out after service entry – also encouraged the timeline.

“It would have been easy to push it off because of the delay… but it’s really important to know this before we go into service,” says Sheldon.

GE obtained US certification for the GE9X in September 2020 and Sheldon says the next step is a 3,000-cycle ETOPS test at Peebles which should complete in the first half of next year.

In addition, the company continues to work towards European certification for the engine; Sheldon anticipates the milestone in late 2021 or early 2022.

Further out, he sees the likely next application for the GE9X on a freighter version of the 777X.

“All our efforts so far have been on the [777]-9 but there may be a lot of activity coming up on a freighter,” says Sheldon.

In a late October earnings call, Boeing chief executive David Calhoun said it was “evaluating the timing of launching a freighter version of the 777X”, but gave no further details.

However, with the Gulf’s big three carriers major customers for the passenger variant there is a strong possibility of a launch at the forthcoming Dubai air show, potentially through the conversion of existing orders. Qatar Airways, which holds 60 orders for the 777X, has been strongly tipped as launch customer.

No production engines have so far been shipped to the airframer for the 777X programme, but Sheldon says this will happen “in time to meet Boeing’s demand, which we expect to be in early 2023” to meet a service-entry plan for October that year.

Peak production is likely to be reached “after a couple of years”, he adds, although the exact output level “is still to be determined”.

Meanwhile, GE is still waiting for the exact specifications from Boeing for the smaller but longer-range -8 variant of the 777X before defining the exact thrust requirements for the GE9X on that aircraft, says Sheldon. 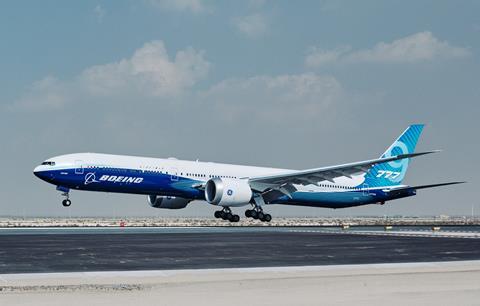 Boeing has brought a 777-9 to the Dubai show and Sheldon says “the moment it touched down we had knowledge that there were no issues with the engine whatsoever on the flight over”.