Rolls-Royce continues to progress the development of different electrical power systems as the UK-headquartered firm eyes future aerospace applications for its technology.

However, even after technical hurdles are overcome, R-R must also work through the myriad other challenges it faces to bring a new propulsion system to market while also dealing with an entirely unfamiliar operating segment. 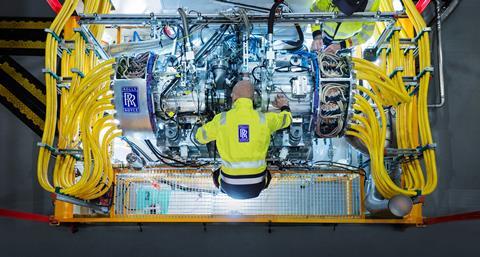 Tests of PGS1 generator are taking place in Bristol

Any products it develops must be first and foremost “flight tolerant and fail safe”, Rob Watson, head of Rolls-Royce Electrical, said at the Dubai air show on 15 November.

“So we have to be absolutely certain that the technology we design will translate to a safe and certifiable product.

“But even when we have crossed that threshold and hit that aerospace standard we still have to demonstrate that we can integrate and optimise a system at platform level and that it makes economic sense [for the operator].”

R-R earlier this year began testing at its Bristol, UK facility a hybrid-electric generator with an AE 2100 turbine engine at its core.

Spun out of the cancelled E-Fan X programme R-R was involved in alongside Airbus, the system is sized to generate 2.5MW of power. So far, the Power Generation System 1 (PGS1) has achieved output of 1MW, says Watson.

“It is brilliant that we have progressed that to system test and have already run at 1MW,” he adds.

There is no current application for the PGS1, but Watson sees potential for it to be used to power hybrid-electric aircraft or as an important source of power for larger more-electric aircraft.

Stored energy produced by the generators could also be fed back into a gas turbine engine to provide a power boost in crucial phases of flight, reducing the load on that engine, he says.

“Now we need to consider the steps from this point to certification and into a product.” 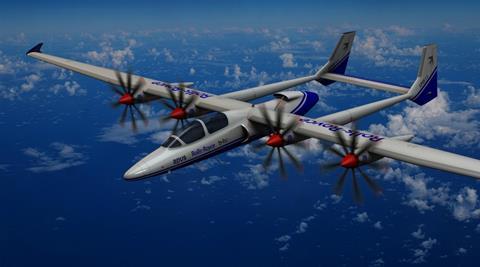 APUS i5 will serve as testbed for hybrid-electric systems

A separate hybrid-electric powertrain based around its M250 helicopter engine is also being developed at the manufacturer’s Dahlewitz site in Germany, geared towards the regional air mobility market.

This will power the 4t APUS i-5 aircraft, which will serve as a flying testbed for hybrid-electric systems. R-R has so far completed the critical design review process for the platform, says Watson, potentially leading to flights from next year.

Again, R-R has no application for the technology, but will analyse the results of its test flights to analyse if “we see a route to market”.

“Even if we decide not to progress to a product it is more learning,” he says.

But all these applications take R-R into parts of the market far removed from those for its traditional widebody gas turbines, and the financial strategies that underpin them.

“Some of it is a completely different economic model,” notes Watson; R-R continues to work with its partners to define “what that total offering looks like”, he says.

That will include how electric powertrains are supported when in operation.

“It’s an area that gives us an ability to have a different relationship with our customers to look at the business model on how we sell and support things,” says Ewen McDonald, R-R chief customer officer.

“We are still working towards it at the moment. But we have a bit of time to think about it as the first products won’t be out until the middle of this decade.”