BAE Systems is giving its Hawk the big screen treatment, with a cockpit demonstrator at the show revealing a future configuration with a single, large-area display (LAD) for the pilot.

Already the subject of extensive development work by the UK company, the LAD would help to better prepare student pilots for operating advanced combat aircraft like the Eurofighter Typhoon and Lockheed Martin F-35. Sharing the single display philosophy as the latter type, the advance would enable a new pilot to view a range of information from multiple sensors, plus a moving map, in advance of flying the more sophisticated – and expensive – types.

But the cockpit enhancement also is an element of another BAE activity – to prepare the Hawk for use as a light-strike asset.

Also on display within the company’s static line exhibit area, the combat development is depicted with seven stores stations. These could carry a combination of air-to-air missiles, precision-guided bombs and rockets, air-to surface missiles like MBDA’s Brimstone, and also a centerline pylon-mounted laser designation pod.

BAE says demand exists from nations interested in fielding an affordable strike capability, and also from those considering the acquisition of a so-called companion type for use below their advanced fighters. India also earlier this year tasked Hindustan Aeronautics, working in partnership with the airframer, to pursue the development of a combat Hawk.

Unlike an earlier single-seat strike version of the Hawk, the design now being investigated would retain the trainer’s two-seat configuration. Indonesia, Malaysia and Oman are the only operators of Hawk 200-series aircraft, with Flightglobal’s Fleets Analyzer database recording a combined 38 as being in use.

The main exhibit at BAE’s display is a Hawk T2 from the UK Royal Air Force’s 4 Sqn. 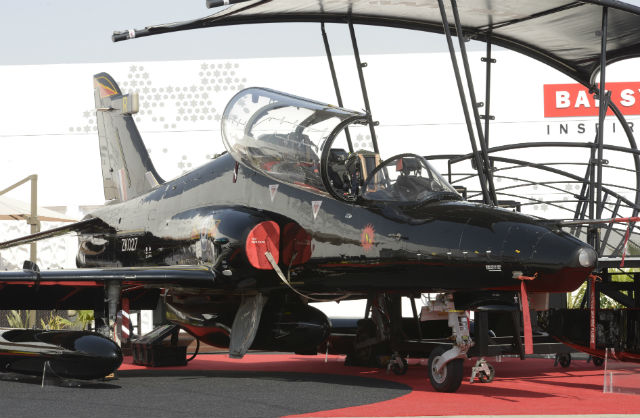 This is similar to the trainer standard recently flown for the first time for repeat Hawk customer Saudi Arabia. The nation is to receive 22 examples of the new-generation jet from next year, while Oman also has ordered eight.

Lifetime sales of the Hawk stand at just shy of 1,000 units, and with a major cockpit evolution and potential armed role in the works, BAE is optimistic of adding more orders for the ubiquitous type.