DUBAI: Combat-tested A330 MRTT to get technology boost

The United Arab Emirates air force is exhibiting one of its Airbus A330 multi-role tanker transports (MRTT), having gained the ability since the last show to use the phrase “combat-proven”.

One of three Airbus Defence & Space-modified widebodies operated by the service, the aircraft is equipped with under-wing hose-and-drogue refuelling pods, which support operations with the Dassault Mirage 2000. It also has an advanced refuelling boom system, cleared to support other MRTTs – and crucially the UAE’s Lockheed Martin F-16E/Fs. These have been used in an offensive role as part of the international campaign to tackle Islamic State militants in Iraq and Syria. 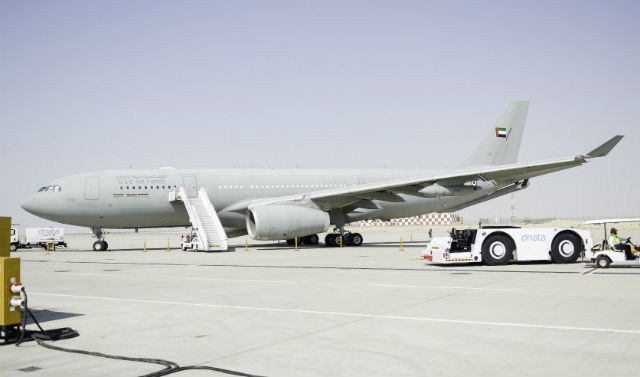 Airbus Defence & Space has so far delivered A330 MRTTs to the air forces of Australia, Saudi Arabia, the UK and the United Arab Emirates, with a combined 22 in current service. Further examples are on order for France, Singapore and South Korea, with India and a multinational group of European operators also planning to confirm acquisitions for at least another 25.

Today’s users have logged more than 56,000 flight hours in over 14,400 cycles since service entry in 2011, and all have called on their assets to support combat aircraft during the current conflict. Despite experiencing higher than forecast usage rates – currently totaling around 2,000h per month – the type is delivering an availability rate of up to 96%, Airbus says.

But with Boeing now in a position to challenge the A330’s recent dominance in international tanker contests – its first 767-derived KC-46A Pegasus is in flight-testing for the US Air Force and was recently secured its first export deal with Japan – Airbus is looking to enhance its offering with new technologies.

A new build standard will be delivered from 2018, heralding aerodynamic improvements and new mission computers. Airbus also is investigating the potential for operators to take advantage of the A330’s increased maximum take-off weight of 242t, says head of military derivatives programmes Antonio Caramazana.

Various post-production configuration modifications have already been integrated for Saudi Arabia, the UAE and the UK, and the Royal Australian Air Force’s fleet will complete a boom upgrade before year-end.

Airbus also is conducting laboratory-based modeling work to assess the feasibility of using an automated system during boom refuelling. Likened to the use of assisted parking in cars, this relies on the boom moving itself to align and maintain contact with a receiver aircraft’s fuel receptacle. The next step will be to install the required software in the company’s A310 tanker demonstrator, with the ultimate goal of performing tests next year with a Portuguese air force F-16.

“We’ve got good technology,” says a bullish Caramazana. “And the best tanker.”