Chinese airframer AVIC has delivered a shock at Dubai by revealing a surprising level of detail about its proposed FC-31 Gyrfalcon fifth-generation multi-role fighter, even though the type has yet to secure a launch customer.

The aircraft being promoted appears to be a follow-on development of the company’s J-31, a mysterious black fighter aircraft that appeared in at the flying display at Airshow China in Zhuhai last November. The J-31 had its first flight in 2012, but virtually no details have been publicly released.

In a Dubai press briefing, Gyrfalcon designer Lin Peng said the FC-31 is envisaged as a low-observable jet with “multi-spectrum, low-observability characteristics.”

The fighter will be capable of a range of missions, including offensive/defence counter air, deep strike, suppression of enemy air defences, interdiction, close air support, and intelligence, surveillance and reconnaissance.

In a video shown during the presentation, a squadron of FC-31s communicated with each other through secure datalinks. Another slide showed how the aircraft’s small cross section reduces the threat radius of enemy sensors and weapons. 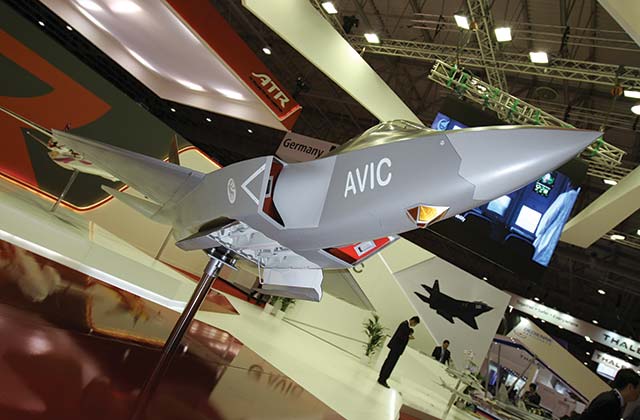 No details were given about the FC-31’s sensor suite or weapons, but AVIC says this equipment and communications equipment can be tailored to customer requirements.

AVIC’s disclosures were striking given the veil of secrecy that has covered the J-31 programme – at Zhuhai, company representatives flatly declined to discuss the aircraft or its performance characteristics.

Still, there is a great deal of mystery about the FC-31. AVIC did not allow time for a question and answer session after the briefing, obliging reporters to crowd around executives as they attempted to exit the chalet.

During this ad hoc Q&A it emerged that the FC-31 has yet to find a launch customer, although there are discussions with the Chinese air force. Executives also decline to comment on the engines that power the J-31, believed to be the Klimov RD-93s that power the RAC MiG-29, or the powerplants for the FC-31.

Achieving the first flight in 2019 is also contingent upon securing a "well-funded" customer, it says.