FlightGlobal’s latest long-term forecast predicts that 43,725 new commercial jet and turboprop aircraft will be delivered globally into passenger and freighter airline service over the next 20 years. Of these, some 3,000 new airliners will be delivered to carriers in the Middle East region.

The Middle Eastern airline fleet has grown at an average of 6.3%/year over the past 20 years, and although its 1,400-strong fleet is just 5% of the global fleet, its capacity share in seats is over 7% because of the large numbers of twin-aisle aircraft.

FlightGlobal forecasts that the fleet will grow by 4.1%/year in the next 20 years, which will lead to 1,680 additional aircraft and take the fleet to over 3,050, increasing its global share by one percentage point to 6%. This forecast has been tempered slightly over the previous forecast as a result of new economic inputs and a likely slowdown of capacity growth in the Gulf hubs. 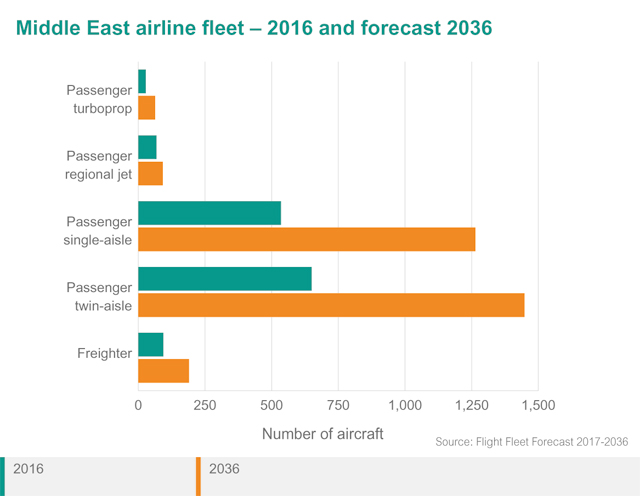 About 93% of the fleet is currently used in the passenger market and 7% for carrying cargo; this share will increase by one percentage point for the passenger fleet by 2036.

With a 7% share of global deliveries (and a higher 12% in value), Middle Eastern airlines are forecast to take delivery of some 2,950 new aircraft valued at $342 billion in the next 20 years, including some 2,805 passenger jets, 55 passenger turboprops and 90 freighters. This will include 1,265 passenger single-aisles and 1,450 twin-aisle types.

The region has averaged around 120 new aircraft each year in the past three years and will average around 160 a year in the next decade before moderating to 130 a year in the following decade.

Some 95% of the current fleet will be replaced, while 45% of deliveries will actually be for growth.

The Middle East is the only region where twin-aisle aircraft comprise the majority of the fleet – some 51% of the jet fleet today. This dominance will continue with a similar share by 2036, driven by the continued growth of the Gulf hubs, plus the Saudi and Iranian fleets.

Single-aisle aircraft will also show significant growth and increase their share from 41% to 44%; smaller aircraft have a much more marginal role in the region as domestic markets are limited to larger countries like Iran and Saudi Arabia.

The passenger jet fleet of 1,250 is predicted to grow by 4.1%/year over 20 years to 2,805. Airlines in the Gulf are investing in new fleets, especially twin-aisle types, to serve the lucrative Europe-to-Asia transit, Indian subcontinent and tourist markets. With Iran now opening up post-sanctions, there is considerable opportunity for fleet renewal and traffic growth and new orders have been placed in 2016 and 2017. These are major drivers of future demand.

The rate of growth is still expected to be relatively strong, as the big Gulf airlines can use their pricing power to attract business away from European and Asian airlines, albeit via their hubs.

The regional-jet fleet is relatively small at 68 aircraft and has been declining from a peak of around 100 five years ago, mainly as Iran has reduced its fleet once it can import more single-aisles.

Overall, only 90 new deliveries are forecast, a mix of 85- and 100-seaters and mostly for replacement, and the fleet is expected to increase marginally to 90 over the next 20 years. 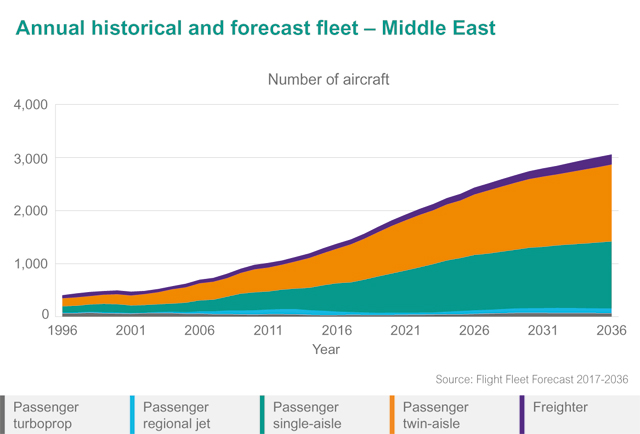 Single-aisle jets have seen major growth (+195 aircraft) in the past five years. Renewal of the Iranian fleet will be a key driver for the future. With 1,265 new deliveries forecast, 61% comprising 150-seaters, the fleet is predicted to grow to almost 1,270 in 20 years, including replacements for over 540 aircraft.

The region has a large twin-aisle fleet mainly due to the growth of Gulf carriers like Emirates, Qatar Airways and Etihad Airways which have built up global networks connecting Europe and Africa to Asia-Pacific, the Indian subcontinent and China via the Gulf hubs, and are now further expanding their networks into the Americas. The twin-aisle fleet is forecast to grow by over 4.1%/year, from the current 650 to over 1,450 aircraft by 2036.

Deliveries of some 1,450 new twin-aisle aircraft are forecast, of which some 55% will be additional capacity, although there will still be considerable replacement of some rather young aircraft, such as A330s, making them candidates for cargo conversion. The Gulf hub carriers are likely to roll over their fleets at younger ages than in some of the more mature regions. We expect almost all of the current fleet will be replaced over the forecast period.

The seat-size share of deliveries is definitely skewed towards the higher-capacity aircraft, with 53% for the 350-seaters – including the new 777-9, which will top 400 seats – as they are seen as being the core of the long-haul network from the 2020s.

The A380 in the large category is predicted to account for some 210 deliveries, led by Emirates. The development of the new Dubai World Central airport for the mid-2020s is key to its longer-term expansion. Demand for the type from the mid-2020s is also dependent on the future of the A380 programme – if an enhanced version or "A380neo" is developed. If this does not occur, the existing A380s may remain in service longer and more demand for higher-­capacity types like the 777-8/9 and A350-1000 can be expected.

Although deliveries of the smaller-sized twin-aisle types (300 seats and below) are fewer in number (470), they will still represent a fleet of some 450 aircraft in 2036, serving secondary and tertiary points and operated by some of the smaller national carriers in the region.

The Middle East's turboprop fleet is a relatively small at just 28 aircraft, and has declined from 44 in the past five years. An increase in the fleet to 63 by 2036 is predicted, spearheaded by expansion in Iran.

Over the past five years there has been an increase in the fleet of freighters serving Middle Eastern carriers, especially of large widebody freighters as the region’s carriers take a larger share of long-haul traffic. Emirates, Etihad, Qatar and Saudia have all built freighter fleets and also have high capacity in the bellies of their passenger fleets. Their traffic growth was one of the few bright spots in the recent cargo downturn.

The fleet is forecast to double by 2036 from 94 to 190 and deliveries are to total 91, with the 777F being favourite. Conversions will account for another 50 aircraft, including A330s and some narrowbodies for regional feeding in the Gulf and Iran.

More information about Flight Fleet Forecast, along with our 2017 report ­summary, is available at: flightglobal.com/FleetForecast